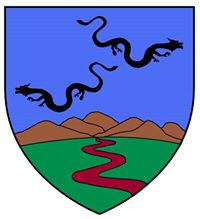 Grand Duchess Dame Aristiri Skiiesdottir, of Dragons of Fire Valley within the Kingdom of Northern Lights

”I'm going to sew a beltloop to your nose!!!”-- said to then King Darrian while giving birth to their daughter.

Alene DiaSkiie Kirkpatrick started playing in July 1994 in Shrouded Valley, VSR when her eldest son was 3 weeks old. She attended Mystic Glade in Knoxville, TN briefly (March – July 1996), returning to Shrouded Valley, VSR in late August that year. When she was made a Bird of Prey in 1998, she was given the nickname "Aristiri" (Crimson Hawk). She moved her credits to Mithril Hills (then VSR, now NL under BS) in June 2003.

On the rare occasion she is on the field, Aristiri prefers to play Druid. If it is Arts and Sciences, service, or office related, Aristiri is interested. Her Knight, Sir Hawk and her former Squire, Warlord Shyden tried desperately to teach her to fight. Working very hard(ly), Aristiri has managed to earn her Order of the Snake! She hopes to remember to enter a second tournament one day...

She was stripped of her Crown belt and had her Serpent belt suspended in 2004 for stealing from VSR's coffers (in May 2003). The people of VSR also voted at that time that she would no longer be allowed to hold a kingdom office or touch funds. The BOD of VSR suspended her from attending anywhere in VSR for six months, and from attending kingdom events for a further six months (May 2004 - May 2005).

She resigned her serpent belt at Blackspire's Althing in May 2005. There was going to be a vote that day as to weather the newly merged kingdom of Black Spire would strip her Serpent belt, due to having a system in place for the resignation of titles Aristiri chose to resign the belt as opposed to putting the newly formed kingdom through a difficult althing in regards to her remaining belt.

In February 2007, by Althing, Blackspire voted to allow her to run for Regent, reversing the earlier decision.

In July 2009, by Althing, Blackspire voted to allow her to fight for Champion, further reversing the earlier decision.

In November 2010, by Althing, Blackspire voted to allow her to run for GMR, further reversing the earlier decision.

In August 2014, by Althing, Blackspire lifted the remainder of her restrictions within the Blackspire borders.