Lord Squire Merric the Fifteenth, Paragon Bard of Ethereal Tides, in the Kingdom of Polaris 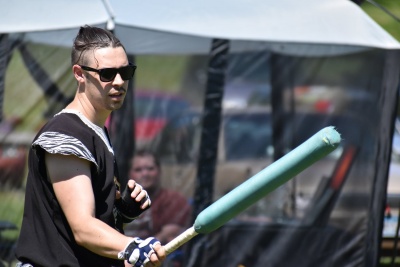 Starting in 2015 at, the then Shire of Ice Haven, Merric was brought to the game by Concordia, who heard about the game from Valduthain the Clanless. Shortly after Ice Haven became a Barony, Merric took up the position of Monarch for 2 terms back to back and a third separated by a single reign, being granted his lord Title by Broton

During this time Merric also Became a member of Tiger Clan. He still holds the record for fastest Cub to Full member in the group.

At the 2017 M.A.M.E. Merric approached Broton to become his apprentice Bard, with the promise he would be worthy of the title Paragon in one years time. What followed was a summer of travel with; Haj, Balder Highwind, Aggro and Timmit. To nearly every park and event in the Kingdom and a trip to Colorado for Rakis. Culminating with Keep on the Borderlands at which Merric along with a small group of Polaricans held a node for the entire duration of a 45 minute game. At the Dungeon day, 2 months prior to the 2018 M.A.M.E. Merric was awarded his Paragon Bard by vote of the Polaris C.O.M.

Late in 2018, Sir Michael Hammer of God took Merric to become his 15th Squire. From thenceforth Merric would be Merric, the Fifteenth.

At the 2019 M.A.M.E. Merric took on the role of Kingdom Prime Minister, following in the footsteps of Abhir Shale NFTY, and Cena Midoryia.

During the 2020 Covid shut down the Kingdom of Polaris locked in all Officers until regular park and events could resume. Making Merric the first Pro-temp PM for the Kingdom with a current in-office time of almost 2 years.

Known as PHOG by the Torches