The Feast of Mars

The Feast of Mars is an interland event held once a year, often near the end of the Summer. Conceived and autocrated by Sir Keluric Tryst, the first Feast of Mars was held in 2005. It was a one day event for the first three years, but has transitioned into a full weekend camping event as of Feast of Mars IV (2008). There are many themed games, and a feast. 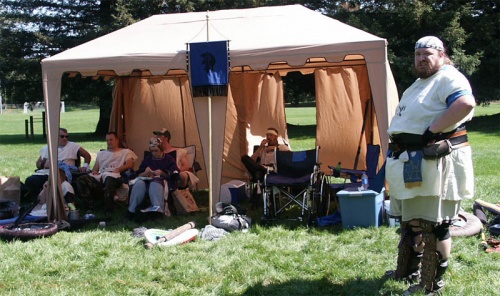 The Feast of Mars is a set of tournaments and games in the theme of a Roman gladiatorial contest. Every warrior is issued a simple tunic with a number, and is thereafter treated as an enslaved gladiator. The gladiators are recruited by members of Roman aristocracy into teams, and battle one another in games. The objective for each gladiator is to impress the present Roman nobles to earn reward, but also to prove themselves before the gods. The pinnacle reward is to become the Champion of Mars. Mars himself will be present at a number of the games, and may bestow his blessing or even armaments to the most proven of gladiators throughout the event. At sundown, Mars will come forth before the Gladiators and choose his Champion of Mars.

In 2008, Feast of Mars IV, was held as a weekend long event for the first time.

The website, designed and built by Griffin Koford, can be found here: