"You don't understand what it is like with warlords: when Brennon goes grocery shopping he is figuring out how to flank the meat counter." -Dame Squeak!, Best Quote of SKBC 2007

Someone who possesses their tenth Order of the Warrior. Must win four major Kingdom Tourneys and or have 21 kills in a row in a Kingdom Tourney. The Gold Phoenix on red background is reserved for warlords, and is usally worn as a belt favor by those who have achieved the honor. 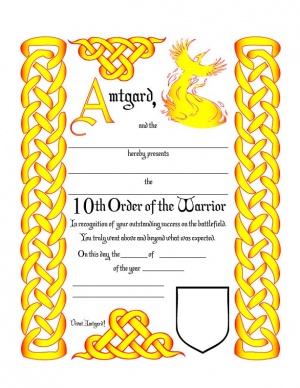 It's very very hard. Winning the title some say is the easy part. Then there is the keeping the title. Here is a Song written by Feral Lynn about Jetara's struggles with it.

Taken from Tawnee's article on Lions and Warriors.

How ironic these statements are! I feel pressed to offer a little history lesson. When we first started the club, the only order offered for fighting was the Order of the Lion. At that time, knights had a very definite code of conduct, which was expected of them. Not everyone in the club wanted to be a knight. Some of the Corsairs and a few others recognized and freely acknowledged that this code of conduct was not for them, and did not even solicit Orders of the Lion. However, it quickly became clear that some of these "mavericks" were some of our best fighters. It was clearly unfair that there was no way to make public note of their skills. So we invented the Order of the Warrior. It was intended that a fighter who earned ten Orders of the Warrior would become a Warlord. A Warlord was to be the equivalent of the Knight, but not bound by the code of conduct expected of the knights. When tournaments were conducted, the fighters were watched for both skill and conduct, and were awarded Warriors or Lions as was deemed appropriate by the Monarch. At this time, there was only one form of Knighthood. Roses attributed to titles of nobility, and Dragons were simply prestige awards. Time passed. Some confusion evolved about the intended difference between Warriors and Lions. An odd sort of dichotomy arose, wherein Lions were almost impossible to earn, yet Warlord was the club's most coveted title. In my opinion, this was the result of the fact that most of the really skilled fighters were the "maverick" types, and the Monarchs all but forgot the existence of Lions and what they meant. Warlord was a separate title from Knighthood, but was no longer regarded as its effective yin/yang opposite. Warlords won Crown Tourneys and were also knighted. The intent of the creation of the Warrior as an Order separate from the Lion fell away. The focus became wholly skill based, with no real evaluation of attitude included.