"There is no chaos, there is harmony

Nothing is true, everything is permitted"

Adhering the principals of both the Jedi and Assassin (Creed series) orders, the heraldry is a combination of their respective symbols.

The simple idea of the assassin's pursuit of total freedom for all people forms the basis within the general set of guidelines laid out by the jedi code. These are essential tools in a my own growth as a player and a person. 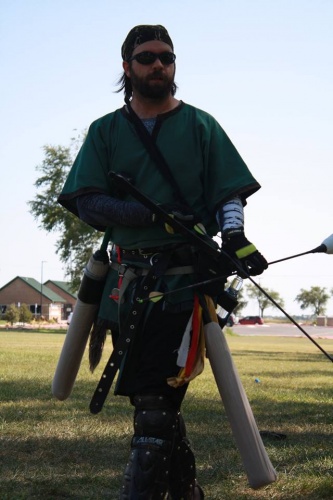 Indanago... What comes to mind when you hear the name? Is it fear? Perhaps it's the name of the assassin that sent a loved one from this world into the next. Is it anger? He could've been the silver tounged pirate from the tavern that just left with your girl. (She wasn't that into you anyway.) The few that truly know the man behind the name, it should be honor. Let me tell you the story of this intriguing character.

No one cares where he came from. He was born, had a childhood and became a young man. Finding his bearings on a ship at sea, he took a rather unconventional approach to fighting. Instead of taking part in the close quarters found during ship to ship combat, he took up a bow and arrow. Covering his crew mates from afar with well placed shots, they became more reckless. Beginning to sack more and more merchant ships until one day, during a routine hijacking, the other ship had a surprise in the shape of a powerful wizard. With a couple hand gestures and strange incantations from the spellcaster, Indanago was suddenly transported to a mysterious land.

This new land was hot. Much hotter than any port he's ever visited. With no sight of any sea, or water in general, Indanago wandered. Dehydrated and starving after travelling the desert for days, he finally found some semblance of civilization. A great stoned city with guards at the gate. Everyone spoke strangely and dressed even stranger. Luckily, Indanago found the only place in town worth his time. The tavern (or what could pass for a tavern in this land). No coin on his person, he was just glad to be out of the sun.

A beautiful woman catches his eye and the things that go through his mind about her are not to repeated here.

Then suddenly his gaze is broken by a fearsome looking barbarian with a greatsword weighing heavily on his shoulder. The black and green tabard is still stained with the blood of his most recent battle. You could call it destiny, or fate, it was really just a lack of seating in the tavern. The barbarian sat down at the same table as Indanago and began working on his grog. Minutes pass with nothing being said but awkward glances to the corners of the room.

"You're not from around here, are you?" the barbarian broke the silence.

Indanago responded while trying to asses his situation, "Where exactly is "here"?"

"The Barony of Evermore Hollow. The greatest land under the Kingdom of the Golden Plains."

"Barony, huh?" Complete new terminology from the lands he was most familiar with. "So, my blood-soaked drinking partner, I notice only one of us has a drink in hand. If you could spare some coin, you might find a friend out of that small investment."

"That remains to be seen..." the barbarian seemed suspicious. "What makes you different from the rest of the people in here?"

'Good question...' Indanago thought to himself. 'A pirate without a ship isn't much a pirate really. No ports to sack or merchant ships to plunder. Huh... Still have my bow, half a quiver of arrows, there's my dagger and sword as well. Possibly the mercenary game to make money. Before being transported, some of the bigger ships had hired soldiers. They had some nice stuff' he smiled to himself.

"HEY!" The barbarian slammed his fist onto the table. "I'm not one for smiling idiots in taverns. You want to prove you're worth a drink, then you come with me."

"Small band of goblins and an orc in the woods outside town. We take them out and the barony pays me. If you survive, I'll buy you that drink. Deal?"

Ugh, work before (probably) getting paid and still the uncertainty of this wild looking man. Why not! Nothing to lose except the dead weight of the barbarian. Once he's dead, sell the sword for a hefty bit. "I'm in!" Indanago saying confidently as he stood up.

"Good, my name is Christoph Skyy. If you're fighting by my side, I would like to know your name."

"Indanago, my foul-smelling friend. And I'll be covering you from behind. The thick of battle isn't my strong suite." The two unlikely pair leave the tavern and Indanago shoots a wink to the beautiful woman he saw when he came in. He'd be seeing more of her later.

The next day, they returned with the orc head and a bag of goblin ears. Christoph carried everything, he was getting paid for it anyway. Besides, he was small on the details as well. A 'small band of goblins ' is almost 50 of the gibbering minions and by orc he meant a brute covered in shoddy armor with a sword to match its ugly face. Indanago began to miss the ease of just plucking off sailors and soldiers from a crows nest. Better be worth that drink... and a room too! Think he earned it. Making his way back into the tavern, the clientele has changed dramatically. No women, great. Only adventurers and the false promises of fame & fortune. Indanago knew better. He's been in the real world where you have to steal what you want.

A couple hours pass, and Christoph joins him at the table. He brought with him two mugs and had the barmaid bring a couple plates of food as well.

"Nice aim. Only archer I've seen do better is a knight, Sir Anubis. He's the local lieutenant of my company in the Barony."

"Uh-huh. And what company is that?" Indanago said as he drank his.. whatever it was in the mug and ate what was on his plate. He wasn't really that interested, but Christoph seemed to enjoy talking about this company of his. Well into the evening, Indanago learned almost everything of the Nizari. Too bad it would be lost knowledge after this night of drinking.

The next couple of years, Indanago played the mercenary game to great personal gain. He met fellow adventurers in Nevon (a wizard extordinaire), Valacor E'Drein (a battle cleric in the making), Morgan (a young warrior willing to prove himself), and the company of Christoph Skyy, the Nizari. At times he fought against monsters, hunted bandits and other ruffians, and sometimes battled against the adventurers he'd see around the land. If the coin was right, though, he did a couple unsavory deeds that was frowned upon by figures of authority and those in power. He was still a pirate in his heart. The lack of a sea made him question whether he was a pirate though... He became secluded and stopped his adventures for a time. Some wondered if he was killed in combat. Others, well, they didn't notice he wasn't around. Nothing really changed with only one person missing in the world.

When he began adventuring again, it seemed to be a different person altogether. There was focus and motivation behind his actions. Was it the same bow-toting pirate that people had seen? He appeared to be the same and the skill was just as sharp, but something had changed. Perhaps a great loss in his life led to this renewed vigor on the battlefield. Nobody knows the real reason he disappeared or why he came back. His mercenary work included working with a couple members of the Nizari every so often, and he saw the bond of that tight knit group. Maybe he missed that close bond that was his crew on the ship way back.

It was a great kingdom event of the Golden Plains. Many brave adventurers gathered and quested for the glory of their kingdom. Indanago never lost contact with Christoph during his time in seclusion. They seemed to be the odd match on this battlefield with controlled rage from the barbarian turned warrior and calculated long range support. It wasn't until later that day that Indanago was taken over by Christoph where the other Nizari were meeting. Unknown to him, his case of initiation for the Nizari was pleaded very boldly by Christoph. Perhaps this was what he was missing in his life. Would this fine-tuned fighting company accept such a gamble in the shape of Indanago?

Served as champion of Evermore Hollow from August 2013 until September 2015.