This page is about the core class. For the award, see Order of the Warrior. 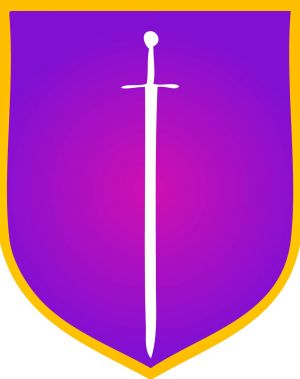 White sword on a purple field: a common heraldry for Warriors

Warrior is a core class exclusively focused on battlefield prowess through right of arms.

Warriors in Chainmail and Brigandine

T: Verbal S: Sorcery R: Self
I: “Scavenge”
E: Repair one point of armor in one location, a shield, or a weapon.
L: Kill Trigger

T: Enchantment S: Protection R: Touch
I: “I enchant thee with Harden” x3
M: White strip
E: Bearers weapons or shield may only be destroyed by Magic Balls/Verbals which destroy objects, e.g. Fireball or Pyrotechnics.
L: Will only affect either the weapons or the shield of the bearer, not both.

T: Verbal S: Spirit R: Self
I: ”I shall overcome”
E: Shake It Off may be activated at any time the player is alive, even while the player would otherwise be prevented from activating abilities by Stunned, Suppressed, or similar.
10 seconds after activating Shake It Off the player may remove from themselves one State or effect of their choice which was present at the time they activated the ability.

T: Enchantment S: Protection R: Self
I: “May this armor protect you from all forms of harm.”
M: White strip
E: The effects of a Magic Ball, projectile, or weapon which just struck armor worn by the player are ignored, even if the object would not otherwise affect the armor.
The armor loses one point of value in the location struck.
This effect will not trigger if the armor has no points left in the location struck.
Ancestral Armor is not expended after use and will continue to provide protection until removed with Dispel Magic or similar magic or abilities.
L: Phase Arrow and Phase Bolt interact with armor worn by the bearer as though Ancestral Armor was not present.
N: Abilities that ignore armor do not trigger Ancestral Armor.