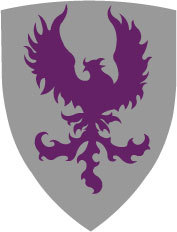 PG is a fighting company based primarily out of the Iron Mountains and Neverwinter. We are dedicated to upholding the "dream" that is Amtgard, and to striving to be the very best at whatever it is we do, be it A&S, fighting, leadership, or service. We have and had some of the best artisans in the game among our ranks, and are always looking for dedicated up and comers to teach and encourage.

Our company words are "Verba non Facta" "Deeds not words"

Phoenix Guard was formed in the year 2000. Recently, we have undergone a rather dramatic overhaul of the basic structure of our company, as of Rakis 2006, and again in 2007. The Fighting Company now has a more localized approach to Company Matters. The three longest standing members of a company within a given geographical region are responsible for the membership of that locality. If a group grows to a point where they have enough members the Heads of the branches can select to split another branch, leaving the Company able to focus on small unit tactics and better handle growth and running of a company at the local level.