"I refuse to say that I can't do something. Give me the supplies and some time and I'll figure it out."
"Nexus, stop teaching, you're going to the emergency room!" - Duchessa Esselia
"Noooooooo…" (upon hearing about a player's character background)
””I don’t mind the mud-slinging. My makeup is waterproof.””

He was introduced to the game by Samantha Three Jugs's daughter (Nohbody), joining in December 2004. Initially he played at Centaur's Glade, followed by Mourningwood Glen, Midnight Sun, and Finders Keep. He was Prime Minister of Centaur's Glade in 2005 and 2006 and later Regent of the Emerald Hills while at Finders Keeper in 2007. He became squired to Nightengael in 2006. In May 2007, he moved to New Hampshire and would not play again until 2010 when he joined Goldenvale. In September 2012, he received Master Dragon from Queen Miaka.

He became a Serpent Knight at Great Eastern 15 in May of 2013. Shortly thereafter he took Petra as his squire on 8 June 2013 and has since expanded his family to include a number of squires, many who have gone on to become knights themselves. Sir Nexus is known for his vast mastery of artistic mediums and is viewed as an incredibly well-rounded artist. He is an exceptional teacher and can usually be found teaching a large array of different classes at events. Furthermore, his skills as a performer at bardics are well known and highly-regarded across the game. He places a lot of stress on being a kind, caring, and friendly person and strives to stay as accessible as possible to the populace. He greatly enjoys complimenting people and frequently says that he believes that people should build up at least one person every day. Nexus is also known for his love of wine, beautiful men, feast-o-cratting large events, and fabulously flamboyant garb, including that of his drag queen alter-ego Dame Donna Party. In his mundane life, Nexus is an Ornithologist and environmental educator, holding a Ph.D in Quantitative and Organismal Biology as well as a Master’s degree in Mathematics. He is married to Nydgenga Dawnbreaker 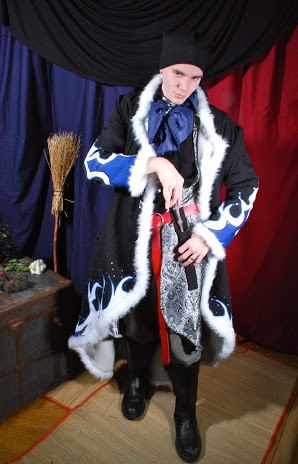 Taken at Haranshire in January 2013.