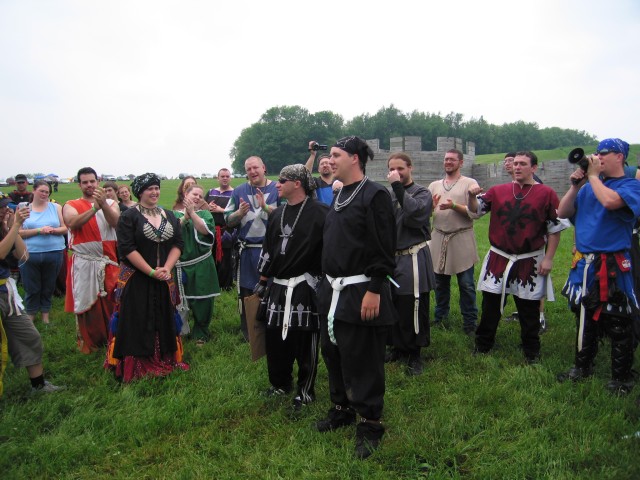 Seen here at his knighting in the Order of the Serpent. 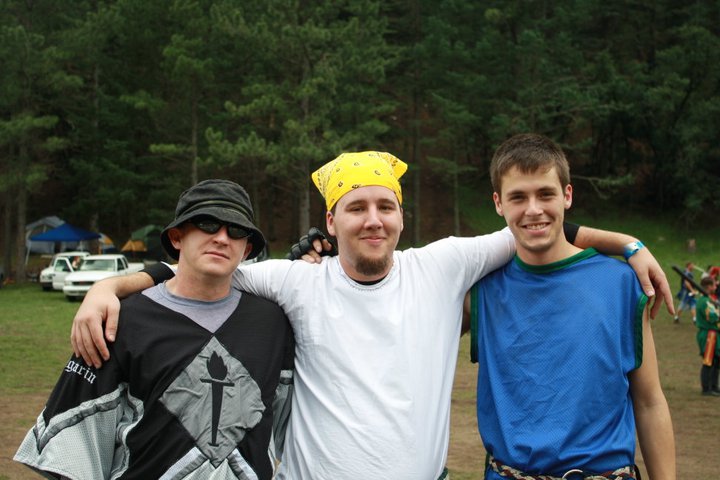 Clan 2010 with Belkev and Bayn

Started playing Amtgard in the fall of 1998 in Vancouver, Washington at the ripe age of 14. He helped to start the park of Black Sun later renamed Deep Water Gorge. Generally having a good time hitting people with sticks, he began to travel around the North West playing at Bon Mot Glen, and Mystic Seas proper.

At some point he got Squired to Aristiri for a couple of weeks before Sir Jamus could talk him into being his squire instead.

In 2001 he attended Pac War 3 before joining the Air Force in October of that year. After basic training, he was stationed in Wichita Falls where he played at Finders Keep] for a brief period before getting sent to Little Rock. After arriving in Little Rock he founded the local shire of Griffons Lake. On some odd chance, he encountered Sir Christian Kendric who at some point had Jamus as a Squire.

The Peeps in the Rising Winds from the Missouri area and the Little Rock area got together and start some home grown kingdom type things. Tal Dagore was born. It was cool. Many fights with the BLBOD later TD dissolved and it was the suck.

Well after a couple Spring Wars, a Clan, and maybe a Banner Wars he joined the Dark Riders fighting company. It was pretty cool for a couple years until things went sour and most of the senior members left the company. After Banner Wars in 2006 where a team of 9 Dark Riders and 5 pickup team members beat the heavily favored Green Dragons team he quit the Dark Riders.

In March of 2007 he took the Acolyte favor offered by the Chosen at Spring War. Later that year at GE some dudes found him got in a big circle and decided to bring him into the Peerage as a Knight of the Serpent. It was cool. After a couple of years as an acolyte it was voted on as Heydeez not being a very good fit, no hard feelings were had and all are still friends.

Accepted the invitation of Ferrum Crux at RW Spring Coronation March 09 and was instated at his former rank in the Dark Riders to which many of Ferrum Crux's members had previously belonged.

All around cool guy... Or dirty hippy, your mileage may very.

Heydeez was squired to Belgarin at the time of his knighting. His current squire is Tryflin.

Heydeez is not Kenshin, nor is he in any way related to Kenshin. He is, in fact, much cooler than Kenshin. They use to play at the same park, and have been known to drink beer in one another's general vicinity.

He can burn the souls right off the boots of girls ... who are asleep next to camp fires.

Video of his knighting