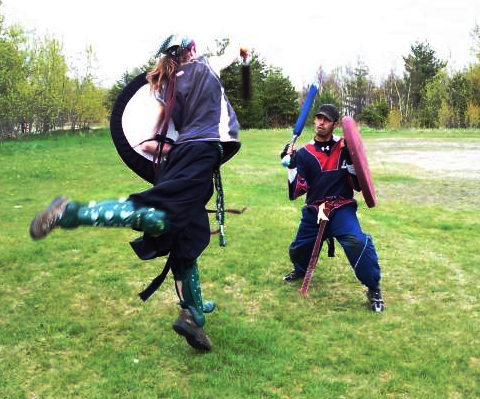 Creator of the 585. Self-proclaimed "RP Jock of Caradoc", Elghinn began his Amtgard career attending early fighter practices in Caradoc Hold. After taking a short break, Elghinn returned to satisfy his love for the fighting aspect of Amtgard, pursuing training wherever and whenever he could. Elghinn has been belted under Syr Sanchez since September 2008. As well, he spent almost two years fighting in the ranks of the Ebon Order before leaving to become a member of Omega in August 2009.

Off the ditch field, Elghinn also enjoys flurbing. He is the longest-serving Captain of the Guard in Caradoc history.

He also holds the key to the one true weakness of Super Fitz, the Golden Squire...Kryptonite!