Squire Shaggy Balach of the Holly, Defender of the Celestial Kingdom, Barony of Slaughter Creek 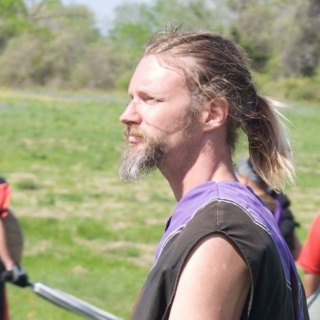 Started playing Amtgard in the late 90's in a small shire in North West Washington, grew the shire to 30+ ppl then went to college.
Continued playing Amtgard in Phoenix/Mesa AZ and graduated college. Went back to Washington for afew years starting in Seattle (Inland Ocean) and ending up in Tacoma Shrouding Mist, then made the mistake of joining the Military. Spent 9 years honorably serving to return to the game in Austin at Slaughter Creek.

Defender of the Celestial Kingdom given by Elemental King Selric 2016