Lord Squire Kanphuzian Duskwalker-Darkjester, of the Duchy of Shrouding Mist, in the Kingdom of Northern Lights

"In the eye of the storm, the believer is calm" - Kanphuzian Duskwalker 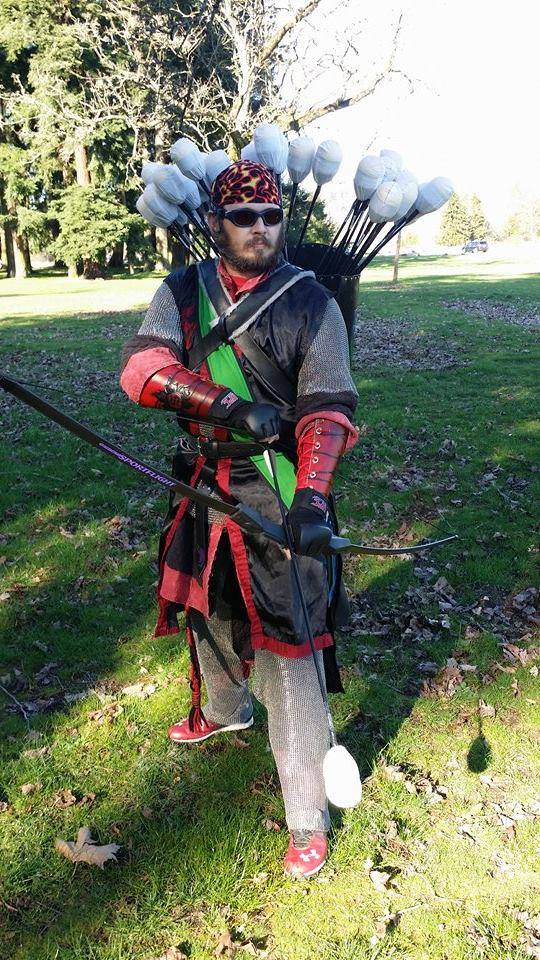 He began participating in Amtgard in Killeen, TX in late 2000. The land was known back then as Midian. (Currently known as Murky Waters) He had learned of Amtgard from a friend by the name of Squire silentthunder.

He played in Midian (Now called Murkey Waters) until military duties moved him to Spanaway, WA and he found his home in Shrouding Mist. He fell in love with the wonderful people at the park, and the great dynamics of the region. After having a four year hiatus due to military obligations and a deployment, he has come back to his home park of Shrouding Mist with a renewed and invigorated sense of purpose.

(SM Protem Champion: 2012-04-01 - 2012-08-01) After Scorpious gave his position of Champion to him (due to mundane reasons), Kanphuzian became Champion Pro-Tem of Shrouding Mist for a short time. He strives to help Shrouding Mist maintain being a fun and amazing place to belong to, as well as helping the Northern Lights continue to flourish.

On Nov 4, 2012 Kanphuzian was invited to become an initiate of the Saracens Tribe Dark Lotus and a pet of the Shadowbell Darkjesters. Four months later at the Northern Lights Coronation Campout, (March 30 2013) he was made a full member of both.

At the Kingdom Level Event held at Greenwood Keep on April 28th 2013, Scarlett accepted to become Page to Kanphuzian Duskwalker. A few months later, due to issues that arose mundanely, Scarlett took a leave of absence but her place is reserved indefinitely.

At Rosewood Memorial XIII (3/17/2014) was moved from being MaA to Aristiri Skiiesdottir to being MaA to fellow Saracen Gaelin of Devonshire by mutual agreement of all parties, making Aristiri's "Man at Army" a bit easier to wrangle.

On March 14, 2015 Kanphuzian was granted the title of Master Monk by the Kingdom of the Northern Lights. He has vowed to continue to continue to terrify all casters and bowmen of their respective classes. Innovation is the key!

At Keep on the Borderlands 6 (Sept 2015), was granted the honor of becoming a Mamluk within the Saracen Nation. A proud honor that he was humbled by receiving.

December 13, 2015: Elected to the Kingdom of the Northern Lights' Board of Directors for a 6 month term.

NLCC Fall 2017: Pixxen Accepted to become his Page. She was let go about a year later.

September 23, 2017: Archduke Gaelin of Devonshire elevated to Knight of the Crown. He honored me by elevating me from MaA to Squire.

September 14, 2019: Granted the title of Lord by The Kingdom of the Northern Lights.

Page belt given by Agriok-August, 2012
MaA Belt given by Aristiri Skiiesdottir-Sept 2012
Moved from Aristiri to Gaelin-July 2014
Elevated from MaA to Squire by Syr Gaelin Sept 23, 2017