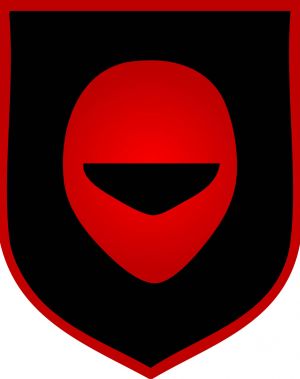 A red mask on a black field: a common heraldry for Assassins

Assassin is a core class focused on stealth, trickery, and (of course) assassination.

From the Japanese concept of ninja to the classic French highwayman and everything in between. The Assassin represents a wide range of characters relying on speed, agility, and creativity rather than brute force to accomplish their goals

T: Verbal S:Sorcery R: Self
I: “I Step into the Shadows”x1
E: Player becomes Insubstantial.

T: Verbal S: Death R: 20’
I: Say the word “Assassinate”immediately upon killing a person.
E: The victim is Cursed.

T: Enchantment S: Death R: Self
M: Red strip
I: “I coat these weapons with a deadly poison”x2
E: The next Wound dealt by the bearer in melee is Wounds Kill.

T: Verbal S:Sorcery R: Self
I: “I vanish from sight”
E: Player becomes Insubstantial and can move to any location within 50’ from their starting point.
L: Caster may not end State within 10’ of a living enemy.

T: Verbal S: Sorcery R: Self
I: “I travel through the aether”x5
E: Player becomes Insubstantial and moves directly to a location chosen at the time of casting by the caster. Upon arrival, they must immediately end the effect as per Insubstantial.
N: If the player’s Insubstantial state is removed before they have reached their destination, the effects of Teleport end.

T: Verbal S: Death R: 20’
I: “Death shall come for thee” x3
E: Target player dies.
L: Target must be Wounded prior to starting the Incantation. Although it still functions even if they are healed by the end of the Incantation.