Duke Sir Glen, of Mordengaard of the Kingdom of the Wetlands.

"We built our castles out of real stone, by hand. Then we conquered them." 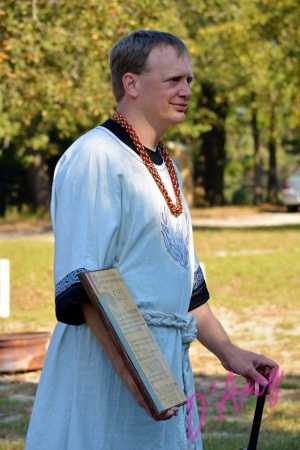 AKA Mallet of Providence, though originally known by the persona name of "Aesius".

From Glen in his own words about his origins; "This was in '81 or '82, before there was any such thing as Amtgard. The Matthews' father taught at Berkeley before moving to Spokane, so I can only guess that it was some variant of SCA. I was thrilled to be able to hit people with a "real" flail and shoot them with "real" arrows, albeit padded ones, but I really didn't care about anything more than hitting people.

It was fun, rampaging through the Rose Garden and through the old stone walls and towers that used to be due west of the Rose Garden. You can still see the remains of a small stone fort we laboriously constructed around a tree above the Japanese Garden parking lot using stones from the tumbled down wall. We were tougher in those days; we built our castles out of real stone, by hand. Then we conquered them."

He has held a number of terms in assorted offices, ranging from Shire Regent to Ducal Champion to Kingdom Prime Minister. Glen spent a number of years in Neverwinter, several years in a freehold, two years in the Rising Winds, and now calls the Wetlands home. He travels a great deal and has fought in every kingdom in Amtgard except GP, because no one even knows where Golden Plains really is.

Glen is a lefty, and runs the blog Lefty Combat. Fighting is his primary interest in Amtgard, and he is always willing to give (and receive) pointers or talk shop with other fighters. He is an avid supporter of role-play in Amtgard, despite not always having had the best results with it. The best way to get on Glen's good side is to make him a tunic.

When Termus proved too virile to continue fighting in tournaments and Jinken proved too mighty to be contained by his mortal form, Glen took over winning the Wetlands' tournaments. It is somewhat suspicious that when the warlords got together to decide who got stuck taking over the job of winning tournaments, all three of the Rogue warlords voted for the one non-Rogue warlord.

Glen is not currently a member of any fighting company. He is a member of three houses of varying seriousness.

In an informal poll on e-sam, was voted The Best Fighter In Amtgard in April of 2011.

Weaponmaster of the Kingdom of Desert Winds, May 2011

Warmaster of the Kingdom of Rising Winds, March 2012

Warmaster of the Kingdom of Crystal Groves, March 2013

Warmaster of the Kingdom of Tal Dagore, May 2013

Weaponmaster of the Celestial Kingdom, February 2014

Champion of the Wetlands by force of arms, June 2014

Warmaster of the Kingdom of the Emerald Hills, November 2014

Defender of the Kingdom of the Wetlands, December 2014

Champion of the Wetlands by force of arms, December 2014

Warmaster of the Kingdom of the Wetlands, June 2015

Warmaster of the Kingdom of the Emerald Hills, June 2015

Weaponmaster of the Kingdom of the Wetlands, June 2015

Warlord, Kingdom of the Wetlands, September, 2015

Glen won some tournaments ( Like the Wetlands ) after he became a warlord, but no one really considers it noteworthy when a warlord wins anything. As of April 2020, Glen's most recent tournament win was the Wetland's Weaponmaster on March 1st, 2020.

Glen was made Knight of the Sword at World Banner Wars in October 2017.

Glen has held over 20 different terms in office across three kingdoms. He has been King of the Wetlands, Prime Minister of the Kingdom of Neverwinter, Champion of the Kingdom of the Wetlands, and has held a host of other offices. He has served five terms in kingdom office, four grand duchy level terms, three duchy level terms, and a host of shire and barony level offices. He has also held positions on multiple kingdoms' Boards of Directors, served as an Amtgard Ombudsman, and taken on other roles serving Amtgard.

Knight of the Crown of the Wetlands, given by King Allicross Vigil in September 2020.

Glen is a long-standing proponent of giving back to the game. He does this by teaching, running battle games, and giving workshops (Smith Stuff). He has traveled to and given multiple-day fighting seminars in the Kingdom of Desert Winds, the Kingdom of Northreach, and the Kingdom of Crystal Groves. He is a regular fixture at SKBC, where he often teaches a full load of classes. He has taught at several of the Wetland's Olympiad events as well as teaching fighting classes at a number of other events, including GotC. He has also served as warcrat a number of times.

Glen puts the "science" back in A&S, using his professional research experience to good use creating articles and presentations solidly backed by peer-reviewed research. He has written extensively on women's fighting, physical factors that effect Amtgard combat, competitive factors, pedagogy, and a host of other subjects.

Glen's approach to art is to use science. You can see an example of his sciencing of the arts with his entirely computer generated [The Warlord Song]

As King of the Wetlands, Glen gave out more awards than any monarch in the history of Amtgard: 688 total awards. Many of these were due to the creation of the new Order of the Crown, so it is unlikely that future monarchs will ever get close to that number.