Heraldry for the Crimson Marauders 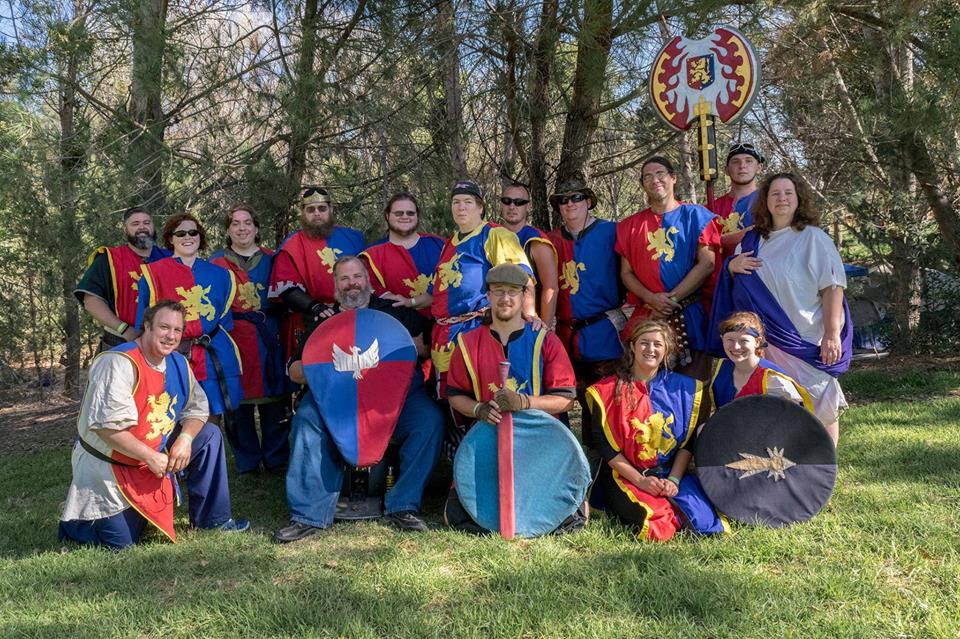 After being used as a pawn in a company Azure Pride then in a very Prestigious company( Grand Duchess Tawnee Darkfalcon's Starquesting Dragons), I decided I wanted my own company. Being a young Amtgardian I had an ideal of a Big Brawny Barbarian type Company. Thus the initial members were Myself at 6'2" and 285, Savat at 6'4"ish and probably 270 or so (definitely more solid than me), Amar Darklighter( later to become Mustafa Kamal) at probably 6'3" at the time and a good 265 +, Zol of Darkenthal at 6'0" and a Marine Corp solid 245. I don't remember the exact order after that but we took Stone at 5'11" and 245 and Guy at 6'0" and 230 and then I broke form and realized we needed to diversify and took my first Squire, Zendrac of Balushia at 5'8" and MAYBE 135 lbs and in no way barbaric. Not all the fighters were barbarians but most were aggressive and large. Savat and Guy were not barbarians but were scary on the field nonetheless.

I always wanted our company to be known for honor on the field and keeping the game fun and still seek that today. It is just a benefit that with the additions and diversification of the company that we are a decent fighting force too.

We helped swing the tide in the Saracen raid of Irongate years ago. We have sponsored numerous feasts and tournaments and Nakita has cooked probably 15 feasts in her career in Amtgard and most of those were as a Marauder.

Part of the notoriety of the Marauders comes from at Clan one year it was muddy and we went around picking up cars that had slid off the road.

We are growing again. I know there are some interested parties in Golden Plains and Evermore Hollow. We just added two new members in Cursed Prairie: Bael and Roshiyu to compliment Squire Sargent Arminius. We also have one new barbarian from Wyvern's Spur, Bran. With our recent growth we also have added from the Barony of Siar Geata, Lord Milan of Amber and Lady Tweak-master scout.
Red and blue express Baby!!!

Squire Arminius has started to recruit new members in Rising Winds at his new home park of Cursed Prairie. He currently has Roshi & Bael fighting alongside him.

I am sure that I have left some out and I do apologize as over 13 years you can see there have been 1 or 2 people that have come and gone through our great company. Welcome to our newest Marauders: Collin The Red and Azus. Both of these capable warriors play in the Principality of Westmarch. Azus has served in Office at the Berkely group Wyvern's spur numerous times currently as Champion. Collin the Red is very integral to the growth Thor's Refuge has experienced over the last 12 months and has served as Guildmaster of reeves and is Currently Baron of Thor's Refuge.