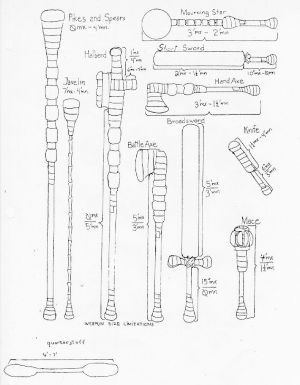 The 'Second Edition of the rules of play, created in the second reign of the Burning Lands. Sometime between 1984 and 85. This is the first rule book to be created with out LaGrue but it sill bears much of the Dagorhir influence. It uses colors to denote weapon types, (green for thrusting, blue for slashing) something stolen directly from Dag.

In the 2.0 Rules the first weapon making instructions are found. As well as information that we would expect to find in our corpora today. For instance. If you became prime minister of Burning Lands and you were not yet a knight, you became one when you stepped down. A Squire was listed under the classes, 'A Squire is a warrior in training under a Paladin, Knight or Warrior with fifteen or more battle games of experience.' Much stoke was put into this 'Battle games of experience', 12 games being required to become a master wizard.

Classes themselves are not as we know them today, Healers were not allowed to heal themselves.