The Shire of Starmount was a member of the Principality of Polaris in the Empire of the Iron Mountains. Located in St. Paul, Minnesota

"You can have a spacesuit, it'll be the one with the air holes in the helmet." 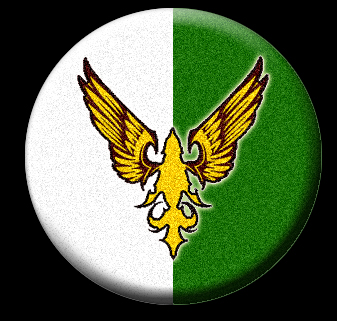 Starmount in the Time of Technological Terror

Starmount was not a moon-sized Imperial battlestation armed with a planet-destroying superlaser. It was simply, the first space station in Amtgard.

Starmount was completely built by the Empire of the Iron Mountains off the backs of brave Starmounticons who fought the endless wave of none believers of outer space (communists). In addition, the officers were titled appropriately to meld with the science fiction genre.

Formed in 2003 by former players of Northguard following its demise. In 2006 the chapter was brought under sponsorship by the Principality of the Rosetta Pact and by extension the Empire starting a shift from what had traditionally an Emerald Hills region to an Imperial one. Another occurrence during that year was a mass exodus following drama and a pair of elections which did not end favorably for a clique in the park, which resulted in roughly half of the population Park-Hopping to Mists of the Dawn. In 2007 the Rosetta Pact folded and the chapter defaulted to the status of a non-core Provence. In 2008 the chapter became one of the charter chapters of the newly formed principality of Steel Valley (which has since undergone two name changes). In 2009 the chapter moved to another park in St.Paul in an effort to increase recruitment. The move introduced several new players into the population by the end of the year and the chapter reached its peak population at this time with around 20 active members per month. The chapter began a slow decline beginning in late 2010 as players slowly moved away or quit at higher rate than new players could replace them. It was also at this time a few inactive players attempted to form a splinter group called Tortuga in an area where about half of Starmount's populous lived The splinter group's contract was denied by the BLBOD at the request of Lumpy, the sheriff at the time, and soon went defunct. In early 2011, Starmount's neighbor to the south Mists of the Dawn established a second gameday in the area where Tortuga had been and used the numbers gained from it to reach Barony status. By autumn 2011 Starmount's population/core membership had dwindled to 5-8 players per month. In October 2011 the Sheriff, Raphael, began merging the chapter into Mists of the Dawn and finally declared the chapter defunct at The Sequel in May 2012

Starmount was the first park to have a victory in outer space
First park to have a giraffe as a contributing member
Members of Starmount refereed to themselves as Starmounticons
Up until November 2008 members of Starmount were given Transformer names.
Starmount's park had a carousel,a roundhouse station and a conservatory
Was home to the House of the Peppered Squid
Home of Battle Ditch
Had an underground opium den run by neighboring Chinese
We were the English Pound