A Barony of Rivermoor in Lincoln, Nebraska.

Ivory Tower Heraldry:Party per chevron azure and tawny, a tower argent surrounded dexter by an axe argent, and sinister by a sword argent

In the barbaric past, the Ivory Tower was desolate. Its first attempts to be settled by civilized men and women failed, circa 2001. A second exploit was attempted, beginning in February of 2005 by Raku eben Xerxes and Ruuna Darkwolf. Their efforts blossomed forth a young pioneer shire. Acting as our leaders and examples, they fostered an environment friendly to companionship. However, success was not easy coming. After many months of three person class battles (consisting of all warriors), an influx of rookies hit. During this migration, many of our current leaders and veterans made their way to the Shire, bringing friends and family to participate in the revelry. In 2007, The Ivory Tower was a healthy Barony where numbers were solid, albeit unimpressive.

During its time as a Barony, internal strife, harsh winters and record loss caused problems within the Ivory Tower, resulting in a low amount of participants in gamedays. While troubling, this was shortlived. Young leaders began to emerge within the households and fighting companies in the Ivory Tower. With the ORK fixed, calendars set and the blessing of fair winters, the Ivory Tower entered an age of prosperity circa 2011. The Ivory Tower now has an annual average monthly attendance of 46.25 unique individuals, with its peak index of unique sign ins per quarter (Apr 01 thru Jun 30) averaging 60.667 unique sign ins. Our highest month of attendance on record is June 2013, with 80 unique sign ins (including guests). Our highest day is currently August 11th, 2013 with 69 participants including guests. In August of 2013 the Ivory Tower was elevated to the status of Duchy by Prince Selhrac of Rivermoor. Ivory tower voluntarily self-demoted back to Barony status on 8/20/18. 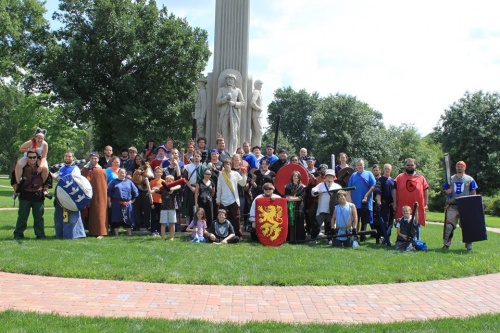 Photographs Over the Years