"I may not agree with you, but I will listen to what you say. No matter how wrong you are."

My persona is a Russian mercenary from that era who was formerly in service to Prince Alexander Nevsky. The guy who wiped out the Teutonic Knights, beat up the Polish Army, and chased the Mongols back across the steppes. In short, he was a for real badass that unified a lot of the Russians of that time. The wolf was one of his units symbol. I left his service in rather a hurry one night. How was I to know she was Prince Alexander's niece?

Due to his fondness for playing a Fire Giant, his size (6' 6"),and his passion for spicy food, it is many peoples theory that his true ancestry is from the Norse Fire Giants. It is also theorized that he is descended from Norse Dwarves due to his passion for weapons making and enjoyment of a quality brew. In the dwarven ancestor theory his height size is due to a pituitary gland disorder- he really should only be 3'8" tall.

Another legend has it that he is really an illegitmate squire who was raised by Sir Ke-She.

Snake Bite was formerly squired to the Wanderer. At the time of his knighting, he was under Sir Ke-She.

The current weapon of choice is a seige cross bow (aka the Ballista). It has gone through a couple of refinements that have increased the range and power. Let's put it this way. If your within 100 yards you might get tagged by him.

He is currently looking into developing a Amtgard legal weapon of mass destruction. 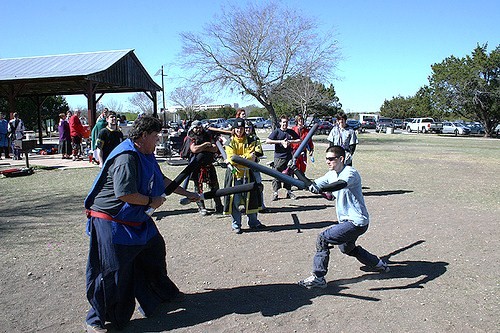 Snake Bite and Bob deciding who gets the last jalapeño