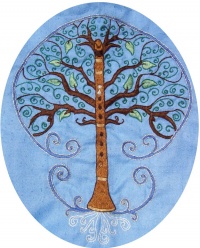 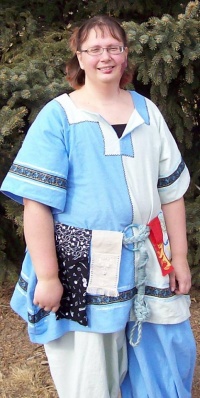 Melody Songtailor joined Amtgard in March of 2014. Always a fan of costuming and crafting, she was thrilled to have an excuse to make Renaissance clothing and accessories. Melody also enjoyed being able to perform on her clarinet. As she returned each week, she developed an appreciation for fighting with foam. She built her first set of weapons - two daggers- and soon was hooked. Lately, she has been applying her crafting skills judging and running local, kingdom and national A&S competitions.

Melody was elected Regent of Darkmoon in September of 2014. On her last day in Darkmoon, she was granted the title of Lady for all her effort in improving the A&S in the Empire. She moved to Phoenix and joined Sun's Haven. Since then, she has spent most of her time crafting, holding A&S nights at her apartment, and holding A&S classes at the park. On October 8, 2016, Melody was elevated to Baroness by then Duke and Regent Sid and Hodr. She transferred to Dragonspine in 2018, and was granted the title of Viscountess on May 5, 2018.

She has been a moderator and content provider for A&S Anonymous since November 2016, writing Artist Spotlights and Technique Spotlights to highlight outstanding members in the A&S community and encourage the members to try new crafts. In November of 2018, she joined the Olympiad committee as the Cultural Seat.

In 2016, she changed the name of her sewing business to Songtailor Stitchery. She creates custom garb and sells sewn and crafted items at events when she is not off teaching A&S classes or doing A&S competitions.

The Household of the Golden Acorn

Melody is Page to Squire Revell. Her Man at Arms, Adand and Belleck, are both inactive at the moment, but she still mentors them outside of Amtgard. Her Page, Herb is a wonderful crafter with an eagerness to learn new skills.

2014 Participated in Rakas Best of the Best, No Placement Ever-After Inspired Dress

2014 The Crafting Games, Season 3- Round 1 "I Might Be Biased" Challenge - 1st place Stained Glass Shield

(The Crafting Games, Season 3 was discontinued. Round 5 was submitted but was not judged.)

2016 Participated in Rakas Best of the Best, No Placement Temari Spell Balls

Melody found that competitions were not fun for her, and so she stopped competing in 2017 and focused on making cool things, judging, and running competitions.