”But before his last breath, Elm did strike true,
Soulspike hit home, a fate long overdue.
The warriors made short work of Ghur's now mortal husk,
but there would be no celebration that day at dusk.” - From "The Legend of Ghur" (a.k.a. Elm's Lullaby) 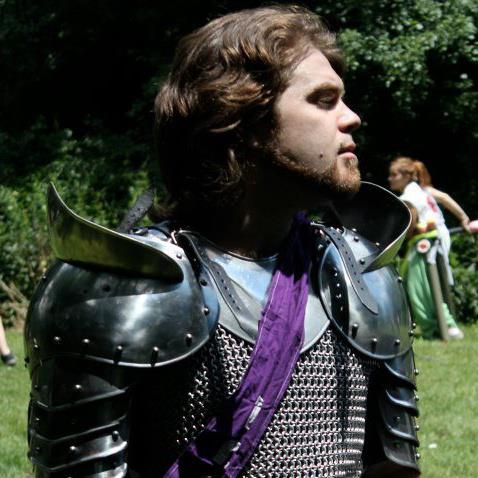 One of the four original members of Twilight Peak (while it was still Winds of Mor Tur), Elm took the position of Champion and has retained it from May of 2005 until running for two consecutive terms as Sheriff from late 2007 to 2008. He has been a driving force in bringing new blood to the shire, and furthuring RP, garbing, and stick-jockery, all at equal levels.

At the event Moonshine 2006 Elm was given a Man-at-Arms belt from his friend, Baronet Sir Nathanial Goldenleaf.

On October 19th, 2008, Elm acknowledged Nathanial's superiority and accepted from him a Squire belt.

Formerly in battle-to-the-death with MaA brother Ce'dar for that future Red Belt; Ce'dar beat him to it but was knighted himself the next day.