A Duchy of the Kingdom of Northreach, located in Anchorage, Alaska. 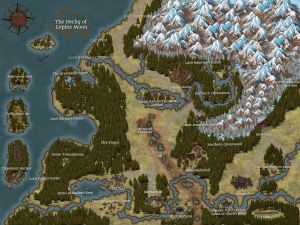 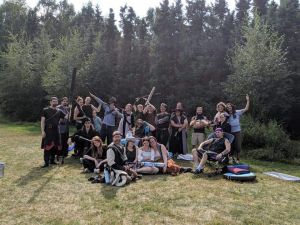 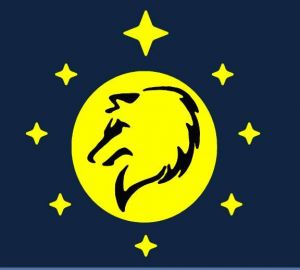 (( This section could use some more content! Please contact Vaellyn to add stories to the history of Lupine Moon! ))

Located in Anchorage, Alaska established September 2010. The Shire of Lupine Moon was built out of the ashes of Glacier Keep. The adventurers that sought to reclaim the ruins of Glacier Keep found a pack of friendly lycanthropes, leading to the naming of the shire. Sheriff Pyro and Mara the Lost, along with their companions, led the task of clearing the region in order to find their lost ruins. Instead of a promised land, they instead found a gathering of barbarian tribes led by a powerful warlord named Bruken. A bloody war broke out between both factions spanning nearly nine months. At the end of the conflict, Bruken was petrified by an ancient spell and his statue is now in the center of Lupine Moon as a memorial to the lives lost.

Once Pyro's reign had ended, many monarchs took up their oaths to protect the realm. Although the barbarian tribes were quelled, it did not mean the end of the threats to Lupine Moon. Many travelers flocked to the promise of safety within the newly built walls. Questing heroes ventured forth to battle the nearby orcs and goblins that resided in the northern peaks and peasants settled farms to create a steady economy for the rising shire. Before long, nobles began to build their mansions around the fertile region.

Dark omens began It started out as a typical raid from the greenskin threat. Adventures traveled out to combat the threat and loot the hordes of wealth that the monstrous adversaries typically left in their camps. Before the monarchy could catch the signs of a greater foe, a dark shadow began to cast it's shadow over the realm. The mighty demon lord, Bar'gual, had recruited the nearby monsters to besiege Lupine Moon in a swift assault. Due to the bravery of the local Scouting Guild, the soldiers of the realm were able to do battle with Bar'gual's main force in the dense Dire Forest. What resulted was a very bloody conflict, claiming many lives. The mighty Healers Guild kept the defenders fighting for nearly three days as both forces clashed. Finally, the bravest of heroes were able to banish the demon lord back to the abyss. The monarchy set to work immediately restoring wards to the land to ensure no further incursions from the lower planes would occur. The farmlands that were destroyed slowly rebuilt and the realm returned to it's quiet peace.

The lands of the north that surrounded Lupine Moon had sworn their fealty to the the kingdom of Dragonspine. When the nobles of the region began to speak of forming a principality, Lupine Moon dedicated many resources into it's birth. After many long months deliberating, Dragonspine had decided to give their northern providence the title of the Principality of Northreach. Gorin was given the title of Prince, uniting the realms that now made up the crownland for the first time in history. Before long, the principality became a fully fledged kingdom. Lupine Moon held many of the kings and queens within it's walls, bringing great prosperity to the realms of the north.

During the reign of Queen Mara the Lost, the wildlife around Lupine Moon had grown sickly. Fearing another resurgence of evil forces, House Stonefist was sent to investigate. Traversing the Greenwood in hopes of finding answers, Abram Stonefist and his kin wandered upon a mine that was protected by a powerful wizard and his retinue. As the situation escalated, House Stonefist defeated the foes and found a strange powder that was created from a metal that empowered lightning magic. The disturbance has created a flux of power that has disturbed the elemental forces of Northreach. The monarchy is looking into this manner currently.

Lupine Moon is an Anchorage based Amtgard group. Our games are held on Saturdays at the following:
WINTER:
Salvation Army Gym
1701 C St
Anchorage, AK