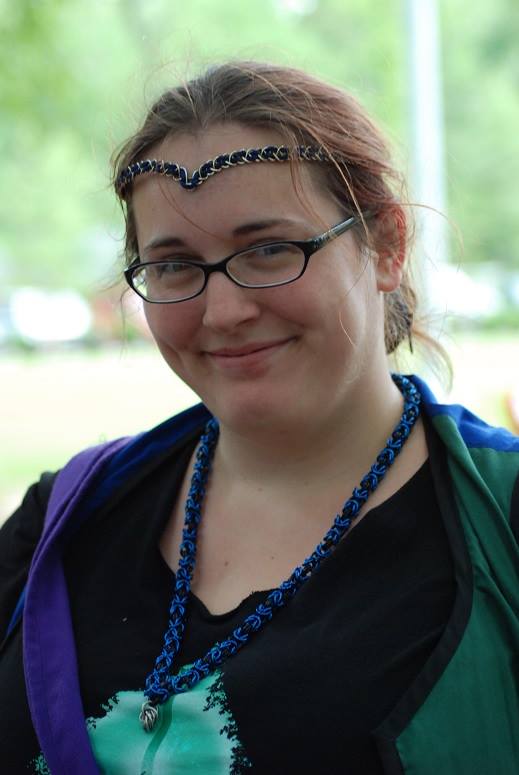 Dahlia started playing at BWH about a month into it's inception, after thoroughly arguing her husband around to come with her. When their group began to outgrow Caim Bloodwyrms front yard, she took it upon herself to get permission to play at one of the public parks. Somehow (and she won't spill the secret) she managed to get permission for the group to play at any public park in the city. Thus, she was made Liaison to the City. Once elections took place, she took on the position of Prime Minister, and held it for three months until mundane life interceded. After returning, she headed the push to get arrows allowed by the city that her province plays in, which was eventually successful. She has since filled the position of provincial Regent and Baroness after she had completed that. Currently, she is reigning as Guild Master of Reeves of the Wetlands

Dahlia began her life in a sleepy town in the southern Wetlands. Her parents were merchants, wealthy ones though, and had their daughter trained in all of the possible ladylike arts. While her parents had high aspirations of her marrying a noble of some sort, Dahlia ended up marrying Finnian Lindalee, the eldest son of the eldest son of a wealthy banking family, and settled down to life in the then Shire of Bloodwyrm Haven. Over time, strife came to the lands, and her husband fell to the undead hoards that threatened them. Fearing for her safety, Dahlia's brother Sinew paid for a hired sword to be her guard. Stravos Avanti, hailing from Messina, guarded his charge well.

Dahlia burned her husband's corpse, heeding his desire to be left in the land in of the dead, and not return to her through the magics of resurrection and necromancy. Once the time for grieving was past, and Dahlia had put off her black mourning for her more vibrant clothing, Stravos quickly became a trusted confidant, rising to not only be her personal guard, but to also command her men in battle, and arrange for the safety of her people. At his suggestion, she took the name Àed, meaning fire in the old languages, in honor of her deceased husband. When his term of service that Sinew had paid for ended, Dahlia confided her feelings to the sell-sword causing him to stay on, and feel out their budding relationship. Currently, the Lady Dahlia, and her Consort, Stravos Avanti, reside at the Àed Keep with her Ladies and Riders, as well as her Men-at-Arms and the boys of Dahlia's House.

Dahlia is the founder as well as one of three current generals of The Legion
House End'Oh!?