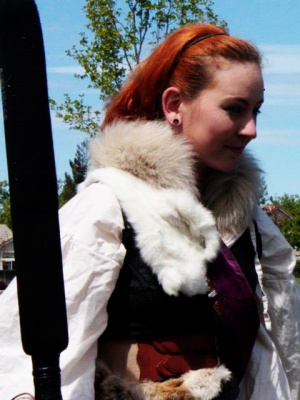 A woman with flame red hair and a demon with a pole arm.

Beware the the boob stab. The pole arm's name is Tabitha. Also beware Atilla Shield-Shatterer (AKA the butter knife), the flat blade that gets passed between Fiona and Rinneon.

Often known for making lots of food and proceeding to eat a majority of said food. Also known for bringing lots of ale and drinking most of said ale.

One of the cofounders of Belial Peaks.

Fiona was raised by lower class peasant parents on a farm near their homeland's border. Throughout childhood, she was taught to fight back against the invading forces that would inevitably cross that border. Specifically, she was not taught the way of the shield maiden, but of the warrior. Her fire-like temperament, lack of interest or kindness for anything she didn't care for, and complete disregard for any attempt at being ladylike earned her the name Fairweather as it was the complete opposite of her nature. Eventually, that attack did come. Fiona donned her father's ill-fitting hard leather and plate mismatched armor. The invading force laughed at the sloppy looking warrior before them and proceeded to move forward. Without a word, Fiona cut down every one of the 20 scouting force with an improvise pole arm just as her family's kingdom's forces crested the hill behind her to see the last man fall. Impressed and pleased, the leader of that company invited the sloppy warrior to join them back to the capitol for a full celebration of the warrior's impressive success. When Fiona heard the word "celebration", her heart heard the words "food and alcohol" and she quickly gathered her few possessions, said goodbye to her parents, and left with her rucksack, her pole arm, and her father's armor. Unfortunately for Fiona, the capitol she reached was not what she hoped. When she was brought before many a leader for congratulations, she removed her helm, only to reveal a feminine face. Unlike every kingdom and reign she ever heard about in her studies of history, this one seemed to find the concept of a woman warrior to be vile. Fiona fled the capitol and stole a horse to get her back home to her family sooner. When she arrived, she found her home had been burnt to the ground and no sign of her family. Fiona passed through her family's fields and into the forest from which the invaders had come and continued west, vowing to find her family, who had burned the home, and to become a great knight someday to return to that capitol and slay every member of the reigning class.

Not long after beginning her travels, Fiona came upon a great mountain that seemed to burst forth from the earth like a pair of horns on a ram. Upon the slopes, she encountered the strangest pair, a healer in black with a strange dark energy around her and an assassin who appeared to be very quickly going native in the rough and tumble wilderness. The three began establishing shelter and tools while the healer spoke of her great love and dedication to her deity, the embodiment of selfish wishing to the point of uselessness and the most powerful of the dark forces that direct men in their actions. Belial.