The Duchy of Turris Lunae

A founding Chapter of the Celestial Kingdom

Founded in 1990, Turris Lunae, or "tower of the moon", was the original Amtgard group in San Antonio. Originally under the sphere of influence of Barad Duin, Turris Lunae remained in Amtgard when Barad Duin left to form the High Fantasy Society.

With Bifost in nearby Kerrville, Turris Lunae was one of the founding cornerstones of the Celestial Kingdom.

Turris Lunae was mostly founded by students at Trinity University in San Antonio, and played in Olmos Park close to the campus.

In time other chapters sprung up in San Antonio, Turris Lunae eventually became defunct when it was split apart forming Traitors Hollow and Gates of Solaris.

Turris became a barony by 1991 and ascended to a duchy in mid 1993. Ultimately the park crumbled into two parks due to "political reasons" in 1996 : Traitors Hollow and Gates of Solaris. Only two years later in 1998 the two parks reformed under the name Traitor's Gate.

What's in a Name

The name Turris Lunae means Tower of the Moon. Barad Duin was also a tower, so that kind of fit that theme, and it also kind of referred to the nearby bell tower at Trinity. But mostly the name was chosen to prevent the runner up name, Blood Horde of the Mad Pain God from being voted the name of the group.

Turris was the first park for a number of people including Michael Hammer of God and Roger Shrubstaff, who were amongst the original members. 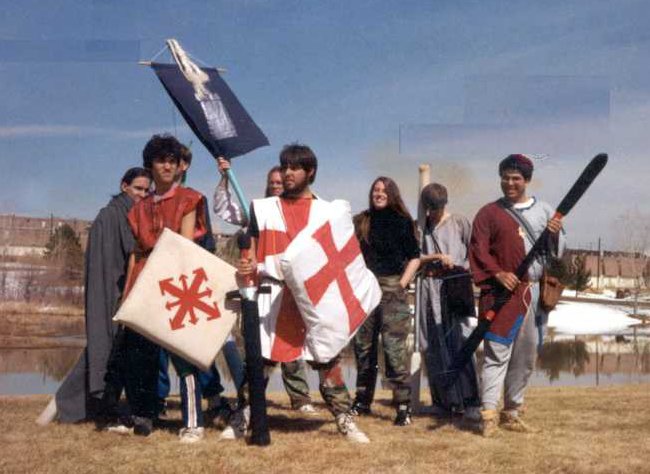 Early pic of Turris Lunae people on a visit to the Iron Mountains in the spring of 1990. Michael Hammer of God is front and center, Roger Shrubstaff is on the far right.