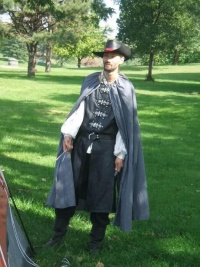 Tankhide is one of the founders of Niflheim, being one of the first few to play Amtgard in the area. He was the first Regent of Niflheim, and from there has proceeded to hold other positions in office. Since the beginning of Niflheim's activity, Tankhide has proved to be an active member, playing as often as possible.

Tankhide transferred from Niflheim to Land's End during the Autumn/Winter of 2011, and then back again at some point, finally settling in Land's End.