a defunct chapter of the Wetlands, located in Crokett, TX. 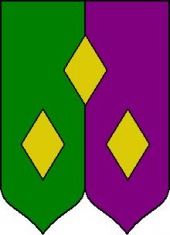 The Barony of Luck Point, formerly U-topus, was a local chapter of Amtgard in the city of Crockett, Texas. They considered themselves to be a small and friendly group. They welcomed anyone who was interested in coming to see what Amtgard is all about, and encouraged everyone to participate, either learning and creating the arts and sciences of the medieval time period, or fighting.

With falling numbers, due to most members moving or getting better jobs, the Baroness Palattemei Panurple voluntarily dropped the park to a shire status to justify the low numbers.

On June 20th, 2008, our park Corpora was unanimously ratified by its members, giving the park more structure.

"4 Mile Park" is the nickname of the park they used. It is located just outside of Crockett, TX on Highway 19 south. It is almost 500 yards down on the right-hand side past Given's Hill (and yes there is a sign on the side of the road denoting the hill) The park itself is a small picnic area with no bathroom and no electricity (although when something like a computer needs to be charged they had a cigarette lighter/electric plug adapter). Not a lot of the normal accessories but its conveniently right off the highway so we are in the public eye and it weirdly has little wind during the winter but a nice breeze during the summer. Surroundings there are about 25 trees scattered through the park and 4 stone tables about 5 foot in length spread about 50 yards apart from each other.

If weather is exceptionally bad, they met at Davy Crockett Par,k in Crockett off Edmision Drive, which is between the Crockett Civic Center and the Crockett Inn on Loop 304. Under the pavilions on the right-hand side at 3 pm.