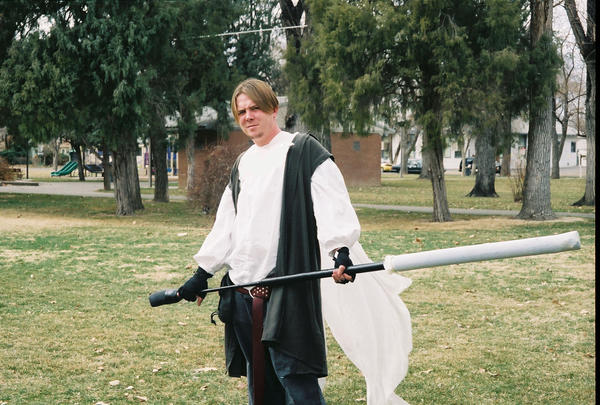 In Feb. of 1996, Dougie was brought out to The Burning Lands by his brother Sir Kezgar, Wife Jazell, and sister Kayrana. He took the name Darian Redthorn. He was called Darian for about 6 months untill a girl by the name of Dakota started coming to the park and referred to him as Dougie, the name stuck from then on out. After being in the game for about a year he was taken under the tutelage of Sir Raphael as a squire, Kezgar's friend. At that time he had also had been cubbed to a new Company founded by Axgar, the Wolves of Cerunnos, and sponsored by Asmund. About a year later, Dougie dropped his belt and guard status with Raphael after having a difference of opinions. Wanting a change all around, he dropped his cubship with the wolves and started a Saracen tribe with his friend Busabi named Kal'adrin. Seeing that was a mistake, he was later picked back up by the wolves (to date the only cub to ever be taken back after dropping), and eventually was brought on as a full wolf in Clan 1999. at same year, he was brought on to join the warewolf household, the Wolf Riders and was squired by Sir Trinity after being a Man-at-Arms to him for 3 years.

Dougie continued fighting in the burning lands until the summer of 2003, when he moved to Grand Junction, CO and founded the group Westgate Pass, which he held office for 18 months and received the title Lord, which later became a core Group of the Principality of the Desert Winds in 2004. While in Colorado, Dougie played a major part in forming Desert Winds, which included contributing to their own Inter-Kingdom event, Salt Wars. He was also initiated into the Honor and fighting based Household Wu Tang Clan in May of 2007.

After spending 4 years in Colorado, Dougie decided to move closer to his family which lived in EL Paso. He moved to Las Cruces, NM where his wife's family lives, and has become an active member in Dragonspine.

However, Colorado has called Dougie back. We miss him down here.