A defunct chapter of The Emerald Hills, located in Arlington, TX.

Cuiviëdôr Amarth always prefered battlegames to ditching. It was common place for this group to run quests with RP.

On Saturday January 31st, 1998, Deitri invited Khraal to his house to discuss creating an Amtgard Chapter. Khraal invited Tyriss, Niles, and Drakell. Drakell invited Sebastian Darkspire (Chuck) and Larin. It was a sort of domino effect. The original members gathered for the first time in Deitri’s front yard and later that day, moved to Veteran's Park. Also present were Detalis Ard, Syri, and Arnden (invited by Larin), and Dana, Macorin, and Admoninol (invited by Deitri). After much discussion, the populace agreed on the name: Cuiviëdôr Amarth, which is a mix of Quenya and Sindarin (Two dialects of Tolkien Elvish), and means “Land of Awakening Doom.”

As the entire populace of the park were newbies, Detalis (the first park PM) got helpful (and much needed) advice from ElSpeth over the internet. Detalis and Deitri got the group’s contract with the Burning Lands signed and notarized, and set up an initial shire monarchy. The only member of this group who had been to any other Amtgard chapter was Deitri, and he hadn’t been out to a park since 1993. As a result, the entire populace were armed with “Old Tech” weapons made by Deitri. (Some of the populace went to Clu’s Midreign in March 1998 and learned the secrets of fun-noodle.)

One Saturday in May ’98, a mundane approached the populace and asked: “Are you guys with the group that meets here on Sundays?” The response was: “There’s a group here on Sundays?” This is how the populace of Cuiviëdôr Amarth learned of Mourningwood Glen. The initial sentiment was outrage. It is insulting to start an Amtgard chapter at a park where one exists already. But neither group knew of the other’s existence. Technically, they were founded about the same time.

The next day, Larin (without the blessing of the monarchy of CA) took a small group and went to Mourningwood Glen. He informed them that they needed to either dissolve and join Cuiviëdôr Amarth, or find another park to play at. This was the start of a conflict between the two groups.

Mourningwood Glen had larger numbers and more experienced and well known players, so the kingdom at large thought that it should be the smaller group of newbies who should dissolve and join the Sunday group. CA's refusal to give up their independence and be assimilated sent many a frown in their direction.

On June 20th ’98, Cuiviëdôr Amarth hosted a kingdom event called the “Elf/Dwarf War” which was an all monster class battlegame. Players could choose from a variety of Elf or Dwarf specialty classes in a large scale, winner takes all scenario. This helped to boost the group’s popularity with the kingdom.

In July of '98, there was a conflict over the election of the Shire Monarch. Tyriss Nel'Fray was running for Sheriff against Larin. Larin initially claimed that he had no interest in the job, and was merely running so that Tyriss could say he wasn't running un-opposed. However, Drakel called Deitri nearly every day to try to sway his vote in favor of Larin. When Deitri arrived late on election day, Detalis (the Shire PM) had already counted all the votes and informed the populace that it was a tie. So when Deitri arrived, the entire populace of the Shire knew that his would be the tie breaking vote. Being that Deitri was a Nel'Fray at the time, he voted for Tyriss. Outraged, Larin and his constituents left Cuiviëdôr Amarth, and began a campaign of slander against their former home park. Drakell and Larin went to Iron Cloud, while Syri, Arnden, and Chuck went to Mourningwood Glen. Later, Rhiannan, and Riff Raff moved to Mourningwood Glen for different reasons.

At this time the remaining populace of CA was invited to meet on sundays with Mourningwood Glen, as there was talk of a “Clan system” involving several groups meeting at the same time and location; a prelude to a merger. In December '98, Forest told the few remaining members of CA, to either give up and join Mourningwood Glen, or go back to Saturdays. They chose to return to Saturdays; a decision that earned them even more scorn from the kingdom at large.

People in the Kingdom were complaining that CA had changed their meeting day to Sunday. This put them in the same park, one the same day, as an already established park. Forest, who was Monarch at the time, met with the leaders of CA and told them that if they were going to play on Sundays, they either had to join MWG or move to a different park. Their other option was to move the park day back to Saturdays. Unhappy that they could not stay as CA on Sundays and play up the hill from MWG, they chose to move back to Saturdays.

By January ’99 (one year after its inception), Cuiviëdôr Amarth was effectively the black sheep of the Emerald Hills, because of their refusal to dissolve their group, and also because many of their members were Nel'Fray; a Household that had become infamous. At this point there were only three active members left: Deitri, Gabriel, and Taeryn; who faithfully attended and kept the Shire together. Gabriel and Deitri were each given a Rose for their service to the club in holding a group together by Queen Eclipse Blackfire (Reign XXIV).

By the spring of 2000, the population began to increase, and the new members were enthusiastic. It was at this time that the old Shire heraldry (featuring a cat and cockatrice holding up a shield bearing a cross) was discarded in favor of the mailed fist engulfed in flame. Many members of the group felt that it represented their determination to hold their group together, and new heraldry was symbolic of the new face of the group. They also decided (per Khraal's suggestion) to call themselves the "Tyranny" of Cuiviëdôr Amarth, rather than the Shire of CA, and their monarch the "Tyrant", rather than the Sheriff. Of course they were still a Shire for all intents and purposes, but they liked the role-play.

In March 2004 (reign XXXII) Cuiviëdôr Amarth had attained the numbers required to be promoted to the status of Barony, which was given by King Martello Entropy. They had also hosted a Dragonmaster for the first time. It seemed possible at this point for CA to shake off the old stigmatism and earn the respect of the kingdom.

In November 2005, attendance began to wane. Some of the populace moved for mundane reasons while others went on hiatus or simply quit Amtgard altogether. With such a blow to its population, Cuiviëdôr Amarth never recovered and is now defunct. Shortly there after, Mourningwood Glen, also suffering from a low turnout, moved to Saturdays to combine the remaining attendance of both parks. 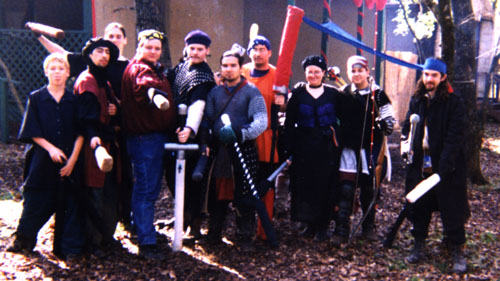 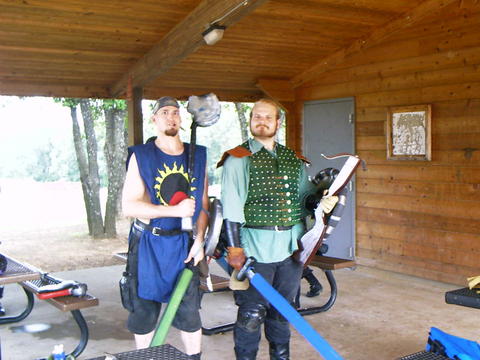 Met at Veteran's Park (3600 W Arkansas) on the corner of Arkansas and Spanish Trail every Saturday beginning at 2pm at the pavilion up the hill from the 2nd parking lot.