A defunct Shire of Westmarch. It has since been replaced by Sunfire Valley

The story of Crimson Sanctum began in August 2004, when Lalailom Risteska and Anberon Nole (both college students at Azusa Pacific University; see right) took up residence in Azusa, California. Activity that first semester was low key, limited to small-scale sparring on the college’s Trinity Lawn by the new group’s scarce equipment. 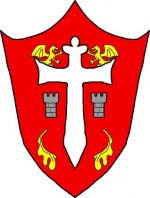 In 2014, the park is once again up to respectable shire numbers ranging from 5-10. Sir Downfall, Prednjak, and Novac have been attempting to breathe new life into his chapter and bring it back to it's former glory, if not surpass it.

The chapter is currently deciding on a permanent park. Please check out our facebook page for more information. A tentative location/time is every Sunday at 1PM at | Woodley Park in Van Nuys, CA. You can find us in Section 2 and we try to meet near one of the first parking lots you see when you come into this section.

In September 2007, these short videos (Clip 1, Clip 2, Clip 3) were shot by a passerby at the old Northside Park location.

In August 2008, these photographs (Album 1) were shot by Rangor's Wench at the Crimson Sanctum-run Northern Invasion event.