Tar'get DeMark, of the Wetlands.

”What? Target is all bunnies and light. He'd never bowl someone over in an attempt to avoid a stab, then shiv them. Never.” -Muerte 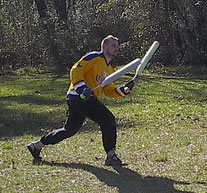 A Warlord of the Wetlands, noted for changing the way the game of amtgard as a whole uses pole arms. He has also served as an SKBC instructor. Generally noted as the worst person with a pole arm to be hit by. Especially when he's mad at you.

High Priest to the Chosen, and former member of the Rogues .