The Barony of Ruby Hills

A Barony in Crystal Groves, located in Morgantown, West Virginia. 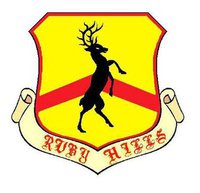 Or, a Gules chevron, with a Stag displayed Sable, Salient.

Founded in October 2010 in Morgantown, WV with the help of members from WVU Creative Role-Playing Club and other local enthusiasts. For its 2011 Coronation Feast, it was overrun by a wave of goblins from Crystal Groves who killed everyone in the park and made off with all the stored food. Hosted Crystal Groves Kingdom Crown Quals December 2011.

Joined the Kingdom of Crystal Groves in October of 2011.

The park was Elevated to Barony status in Spring of 2014

We play every Sunday in the fields located beside of the Mineral Sciences Building and across from the Engineering circle. Game lasts from 12 noon until we get tired or dark.