A Barony of Neverwinter, located in Gainesville, Florida. 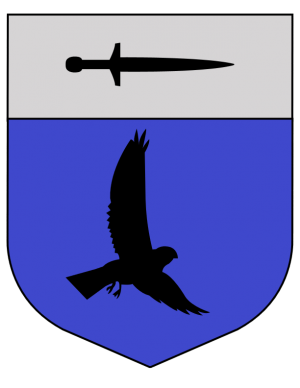 Blue and silver with a black Kestral.

This Amtgard field has been around since 1997. It is approaching its 25th anniversary. It has had a name change here and there (Kestrel Keep), but has returned to a more familiar name of Darkwater. With membership ranging from a shire to over 200 people as the Grand Duchy of Darkwater East, numbers change, times change. It currently has an active population of about 20 members, and is climbing.

They start Sundays at 1 pm at Kanapaha Memorial Park on SW 75th St. in Gainesville, FL.

From I-75 going north turn west on Archer Road. Turn right on SW 75th St. (Tower Road). Turn Right at Kanapaha Memorial Park. Drive to back of the park. We play in the big open field.

From I-75 going south turn west on Newberry Road. Take next right onto SW 75h St. (Tower Road). Drive until you see Kanapaha Memorial Park on left. Turn left at park entrance and drive to back of the park. We play in the big open field.