Lord Eronim Faitzhand of the Duchy of Darkmoon, Empire of the Iron Mountains 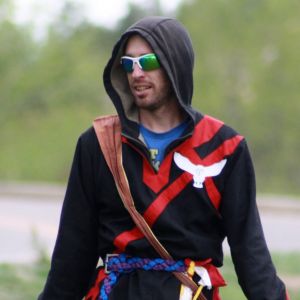 "#trollslayer it's a thing."

Faitzhand joined Amtgard in August of 2014, though didn't get heavily involved until the following spring. He started in the Shire of Grey Lantern, which was struggling at the time. Faitzhand remains in Grey Lantern to this day, and things have been steadily improving. Faitzhand has put in a constant effort at his park, always striving to improve it. His actions has resulted in the park hosting multiple events, and their numbers are on the rise. For these efforts, he received his Lord title from Empress Aeris Kinderd at the Imperial Midreign in September of 2015. Most weekends, Faitzhand can be found throwing spellballs as often as he is swingin' foam at Grey Lantern, though he has been known to frequently visit his company mates in Darkmoon. Fitz moved to Darkmoon for mundane reasons in November of 2016, where he happily continues to play and serve.

Faitzhand has had the name in use for a myriad of games since long before his joining Amtgard. Both his given and surname share these roots. Fitz, as he is more commonly known, is a bit of a flurb at heart. He would gladly share his persona's backstory if you ever ask him.