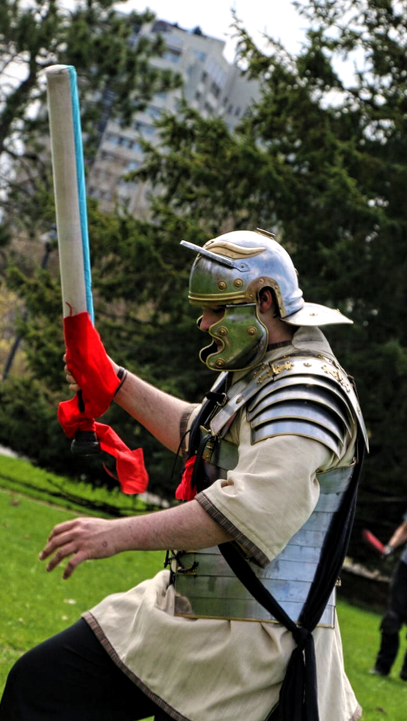 “I would prefer to take you alive. But I get paid either way.” - Quote

“Greetings Moshe, my name is Kreed!” - Kreed’s greeting to Moshe

As a Nephilim, Moshe possesses the ability to use Grace and ascend to a true Angelic form when fully empowered. While in this celestial state, Moshe becomes known as Moshiel (Translated: “Son Drawn From Water of God”) the Seraphim of Balance. It is possible to summon Moshe or Moshiel by praying to the Steel Phoenix or The One Above All. As with all Nephilim, once fully matured Moshe will reach a level of power beyond that of their parent.

Shortly thereafter, the denizens of Felfrost, Linnagond and Wolvenfang found themselves transported to a mirror of Amtgardia known as Raven’s Knoll. There, Moshe found himself being introduced to a pair of Assassins deep in the night. These assassins, Kronos and Albatross, informed him of an impending assassination on the local Monarchs. Accepting the contract, he began to work and prepare alongside Kronos and fellow assassin Kronin, and a turncoat member of the very same family; Winston. Winston was the heir to the Raven’s Throne, but was commonly regarded as the black sheep of his family for his relatively virtuous policies. Through both Winston and Kronos, it was revealed that the contract had been requested by the diety known as the Steel Phoenix. Binding himself to the deity alongside Kronos, Kronin, Kreed, Kestrel and Meera. The assassination was not a success, with only two of the three meeting death, with the Raven Queen managing to escape. During the chaos, Moshe was tracked down and slain by Wolvenfang’s own Duke Granite Wolvenvein. Upon being revived, it was then revealed he had been Chosen by the Steel Phoenix to met out judgement in the interest of maintaining balance.

It is important to note these titles are denoted for character purposes only, and do not reflect in-character titles until formally applied by a ruling authority. Seraphim - Moshe possesses the ability to absorb and utilize Grace and ascend to Seraph status.

Herald-Captain - Moshe trained as a Herald, Strategist, Intelligence Agent and soldier in Ealdomere, Ansteorra, and Valdemar respectively. Granted full whites in Valdemar, granted the rank of Captain following the completion of circuits through Ealdomere and Ansteorra respectively.

Efkinitos - Moshe is considered an Adoptive member of the Efkinitos Clan.

Moonling - Moshe is considered an Adoptive member of the Moonclaw Clan by right of lifebonding.

Reeve - Moshe has received the appropriate training to act with the authority of a Reeve in Felfrost and beyond.

Empath - Moshe possesses the gift of Empathy, the strongest among his abilities.

Mindspeaker - Moshe possesses the ability to telepathically communicate with other Heralds and Mages should the need arise. Doing so drains his Grace substantially, but as a trade off he is considered very powerful at Mindspeech.

Healer - Moshe is a Novice level healer, drawing on his Grace to pool divine energies as healing conduits. It is likewise a Gift, though not as powerful as the others at present.

Sellsword - Moshe is not a landed sword, or a sworn sword, instead working for coin and contract under most circumstances. Exceptions are made for Herald business.

Assassin - Moshe is considered an Adept assassin within his respective clan and Guild. His moral code prevents many contracts from fulfillment.