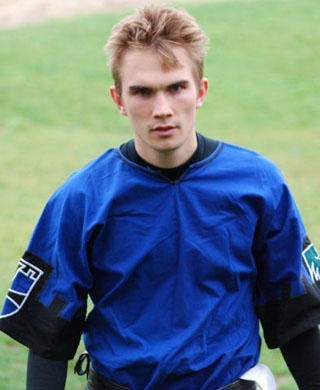 Ailliath stalks away from the ditch field during Westmarch's Infernal Invasion Quest at Wavehaven. January 24, 2009.

Pronounced as "Goliath", without the G.

If you've ever played Amtgard and suffered a broken finger, it was probably Ailliath's fault.

I got introduced to Amtgard through my girlfriend. She saw the local club with a booth on the Cal Poly campus at the end of school, and then dragged me there next year. I didn't actually fight the first day but it looked interesting so I came back, and have been fighting ever since. I hope to attend Clan this year, and get to fight the hordes of people that show up, as I think its a ton of fun to fight against all the different styles you encounter at events.