Trousers, often called pants, are an item of clothing worn on the bottom half of the body, with materials covering both legs separately. They usually extend from waist to ankle, though trousers that are higher than ankle-high are often given a different name. 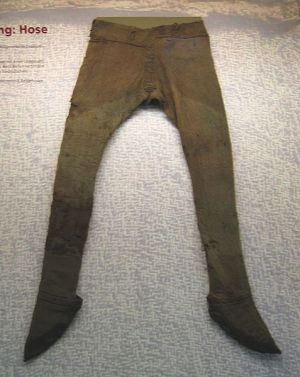 The famous Thorsberg trousers, found preserved for 1500 years in a German peat bog

Trousers have been theorized to have been invented to aid horseback riding, and pairs have been found that are as old as 13th century B.C. in China.

Trousers have taken many forms through history, and used for different purposes in different times and places. In the 6th century B.C., trousers were worn by Eurasian nomads from central Asia. The ancient Greeks thought that the trousers of the Eastern peoples they encountered looked ridiculous, preferring their tunic and toga. The Roman Empire similarly thought that trousers were the mark of the barbarian, though as the Empire expanded outside of the Mediterranean basin they began to adopt styles of trousers such as feminalia and braccae.

As Europe moved into the medieval age, trousers became common for men of all social classes. The people of Byzantium wore trousers under their long tunics as a sort of undergarment. By the 8th century, it became more common for men to wear two layers of trousers: the first was what historians would later call "drawers", and over that was worn breeches. Eventually, these trousers became briefer or longer as the length of the various medieval outer garments changed, and were met by, and usually attached to, another garment variously called hose or stockings.

In the 14th century, men commonly attached their hose to their pourpoints. The legs of the trousers were often unconnected, though later examples of joined hose eventually emerged. The joined hose had an open crotch, which would then be covered by an independently fastening codpiece. It wasn't until the end of 16th century that the codpiece became regularly integrated into the hose, acting as a sewn-on fly.

In the West, trousers have been the standard lower-body clothing item for males since the 16th century; by the late 20th century, they had become prevalent for females as well. Trousers are worn at the hips or waist, and may be held up by their own fastenings, a belt, or suspenders.

Variants of trousers make up the majority of choices for leg coverings among Amtgardians. There are two common categories of pants worn: closed leg trousers, similar in wear to modern pants; and wrap pants, a type of trouser that wraps around the body.

Closed leg trousers are the most diverse type of pants, having a sure basis in history and fantasy. They come in many varieties, with common types worn in Amtgard including Thai fisherman pants, hakama, hose, and many types of pants of a modern cut.

Wrap pants are a general category for open-leg pants wrapped around the waist.