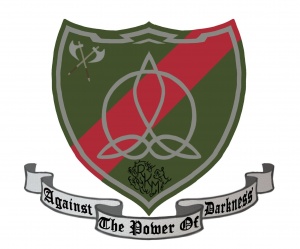 Vert, a bend sinister gules surmounted by a triquetra argent, in canton two battleaxes in saltire proper and overall an orle argent

One day, back in Feb of 2013, Ry was contacted by his friend about a LARP group in the area that he had been to. Ry and his friends made some crude weapons out of pvc pipe insulation, and fiberglass road markers. After a few weeks of going to the park and fighting each other in the backyard, life got busy for a bit. Ry came back by himself in Feb of 2014 and officially became a member of The Duchy of Madoc's Keep. He was informed by Wat that a 2 letter name was not ORK friendly, so he became RyKruh Mallimtar. And that is where his adventure began.

Ry still can be found at Madoc's Keep in the Kingdom of the Rising Winds. Ry started of playing the Monk class at the end of v7. He then found the monster rulebook (Dor Un Avathar) Since then he will play monster whenever he can, especially in battlegames. Ry is very active on the Dor and official rules clarification Facebook pages to help answer questions and learn as much as he can about the rulebooks. 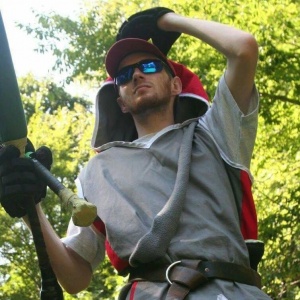 RyKruh Mallimtar was a monk who grew up in the monastery high up in the mountains in the land of Wynnewood where he learned the ways of the monk, including how to fight. However RyKruh (most call him Ry) saw the evil in the world and believed something needed to be done. However the monks were too passive about it, and not taking action. So Ry left the monastery to go out into the world and help rid the world of evil. He started out as a vigilante, however found out a couple things. One, he was not strong enough to defeat all the evil he came across. And two, there isn't always a fine line between good and evil.

Ry traveled for a while until he came across Madoc's Keep in the Kingdom of the Rising Winds. There he met many people and realized he could learn from these new people and become more powerful. He started training with them. They taught him new fighting techniques, strategies, and more interestingly...magic. There was one person in particular that Ry grew fond of. He was known as Tetsu the Green. A Necromancer Wizard who was very knowledgeable about magic. Ry reached out to him and asked how he could become more powerful. And Tetsu knew just the way and turned Ry into one of his undead minions. However Tetsu allowed Ry to keep his freewill. But it came at a price. As a new Ghoul, Ry sometimes cannot control his rage, or a hunger for flesh.

Ry is still at Madoc's Keep sometimes traveling to different parts of the Kingdom, knowing he is no longer human, learning as much as he can. His Fighting Company, Ironclad, had come and gone. He now learns what he can from the new people he meets at his park, and the old friends who have stuck around. 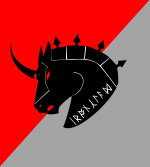 None yet, but its being worked on 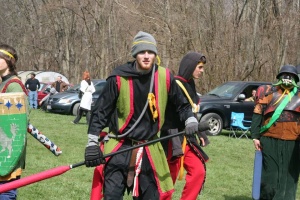