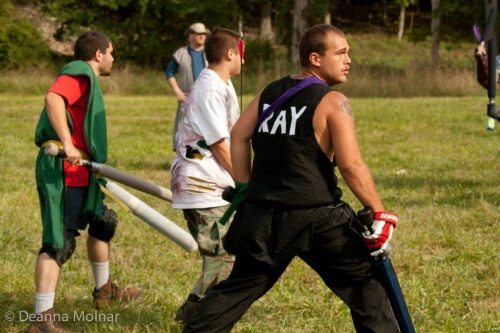 Seen here fighting at feast in a class game; to make the flurbs happy!

Starting the game at the age of 13 in Knoxville, TN in a shire of Stickjocks (Mystic Glade) he came up in a very sink or swim environment. Although he lacked the natural talent and athleticism of other players in the area, his tenacity is unequaled in the fight. Every loss made him stronger and every win brought more confidence. After being introduced to the domination that is Downspear things just started to click and with his combined youth, energy and drive he started to come up as a threat. 8 years later he understands The ins and outs of Downspear and the styles he is up against better than ever and is on a straight and narrow path to evolving Sir Sparhawk's work in showing the most underused style in the game has its place among the Top five dominating weapon styles of the sport. He will not stop until he sits at the top.

Mystic Glade where gods are made, Harbour of Rhye Navy Transplant

Ray has one Page

Arterrious of Harbour of Rhye

Has never dominated Tato. But he did beat him out for first in single during the CG weapon master 2013!

Lord -Given by Sir Toda King of Crystal Groves 2012