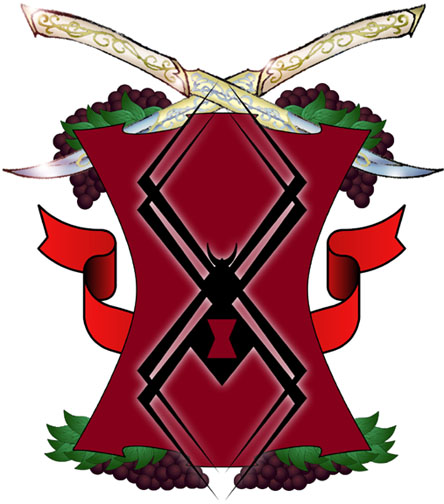 Iiridian Despawna was a Drow elf from the underworld realms. His position in the house was that of Third Boy, but he gradually "arranged" for his older brother's passings.

In Drow Society, these things have been known to happen.

Happenstance being what it was, he encountered Wanderer. Little is known what happened and why, all that is known is that Iiridian considered Wanderer to be that of a brother. A brother he didn't want dead.

Iiridian has returned home to become the first House Lord of House Despawna and his dealings with the upper world are at an end.

May he rule with ruthlessness that only a Drow can wield.

Iiridian was portrayed by Robert Krempa, one of the founding members and Dreamweaver of Avalon's Gate.

After being born in Toledo, Ohio and seeing that his family would hold him back to become much like his heroin addicted father - he joined the United States Marine Corps.

The Marine Corps taught Robert a sense of duty and honor that would he remain true to throughout the rest of his life. He left the Corps to assist with his family's unfortunate dealings with mental illness and as such, due to the then cutbacks in military spending, he was unable to return.

He journeyed to Austin, Texas under the promise of a new life, and found one. Joining the various gaming groups, both live action and tabletop, he found friends and circle of people he could consider family. Falling into the Grimwulff clan, an Amtgard group that had similiar enough ideas of Honor and Duty, he accepted a squire's belt from Wanderer. The fact that they were roommates did make the decision an easy one.

Iiridian is best remembered in the early days of Avalon's Gate. There was never a more dedicated individual to service for the kingdom. He was due far more than the four roses he was awarded, if only because the kingdom couldn't keep up with his numerous and selfless acts. He actually ran gate for a midreign by himself, Colonel's Second Midreign. He stayed awake for the entire weekend, even calling out an errant knight of the sword for eating feast and not paying for it.

No one ever said that Iiridian suffered from a lack of courage.

Iiridian was never afraid of battle, though I think that his hardest battle was internal. While he didn't suffer his father's addiction to Heroin, he did become an alcoholic while in the military. He never went to any counseling or meetings to help him through it. He faced that dragon with his courage and determination. Every time he slipped, he was quickly reminded of why he quit. He had been sober from 1999 on and was very proud of himself, as those who knew his plight were.

He returned home to Ohio to assist some friends and family in their constant inability to function without government assistance. After enjoying dinner with some new-found friends, the car was hit by a drunk driver.

Rob somehow had time for one thought and action. Rather than cover himself or say anything. His single and last action in life was to cover a young child and shield him from the impact. The child was the sole survivor of the crash. Whether Rob would have lived or not is a pointless thought, no kid was dying on Rob's watch.

His body was cremated and scattered as were his wishes.

He is survived by his loyal Border Collie, Sasha, who can be seen at Celestial Kingdom events usually near the Saracen encampment.

We wish you well on your journey and hope that in your next life you will be able to fulfill your dreams.