A defunct chapter of the Principality of Winter's Edge under The Kingdom of Neverwinter. Located in Johnson City, Tennessee. 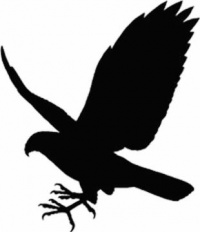 Hawks' Point was first known as The Shire of Lochlan.

Lochlan was formed in the early 1990's by Angus O'Brien who brought the game to Johnson City when relocating to Tennessee after military service in Washington State.

Lochlan was once a group sponsored by Goldenvale. After many episodes of lost paperwork and non-communication, the group began to seek sponsorship elsewhere. During a year of some inner-turmoil and upheaval, a pivotal point was reached in May 2005 when a core group of devoted individuals and newer players opted to take charge and move the group forward.

With this, Lochlan was disbanded and reformed with the blessing of the Amtgard, Inc. BoD and became Hawks' Point. The group immediately petitioned The Principality of Winter's Edge under Neverwinter and was accepted into the group at WE Coronation held July 2005 at Camp Carlson outside Elizabethtown, Kentucky.

Hawks' Point has continued to make strides, being elevated to Barony status in July 2006 and was a strong and consistent Amtgard holding until late 2016. Due to conflict between group members, many left to pursue career goals while others ran the park. Core members began to meet to pool resources in mid 2017 to restart the chapter, and as of early 2018 the chapter is slated to begin meeting again regularly.

Mapquest "Bristol Highway & Carroll Creek Road". Follow directions from your beginning point to the destination, turn onto Carroll Creek Road. Go to 2nd access road (boat ramp) - meeting in the large field to the right of the parking lot. Quests are run in the forest across the road through the Frisbee golf parking access road.