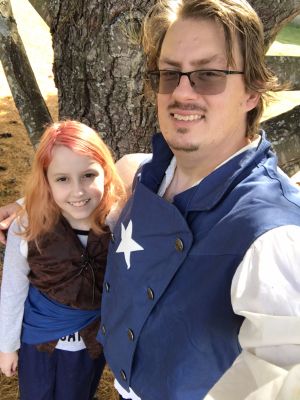 Born in the Kingdom of Tal Dagore, Braul of the Lost Creek tribe, has never settled into a location or career for long. Braul was raised along the farms of rural Tal Dagore where he roamed the woodlands and small hills of his clan’s holdings. It wasn’t uncommon to find him following a creek, picking blackberries, and practicing with combat simulators. Braul trained under the artist Epp, learning about mixing pigments and how to apply them on multiple forms of media.

As a young adult, Braul was wed and had two children. They moved further north, into the Kingdom of the Rising Winds. The winters were much colder, the summers were much hotter. Braul retrained from artist to rat catcher, a job that was much more in demand. As a rat catcher, Braul flourished. His youth of hunting and his artist’s eye for detail helped him excel at finding the locations of plague roaches and dire rats. Many days he would return home covered in blood, sludge, and monster bait. It was a hard existence, but one he reluctantly performed.

Braul’s family moved from the frozen north to the Winter's Edge when the Machine Gnomes requested assistance from his wife, where she forged parts for their arcane machines. Braul was at a loss as to what he should do. There, he eventually found the Shire of Faila Ranae. With a few moons of training, Braul took to fighting with a javelin and short sword. He became Regent to the area. And then the plague settled in. Forced to his bed with a rattling cough, Braul went back to his original training and began practicing art and encouraging others to do so as well.

After a lengthy rest due to illness, Braul returned to Faila Ranae's battlefields for practice. Weakened by his illness, he was in no shape for the physicality of melee combat. When the pirates of Buccaneer’s Respite invaded the river valley, Braul manned the cannons with his daughter, the Murder Goblin, and helped sink Captain Bloodbeard's ship. From there he took up his bow and fired on pirate invaders, trying to hold them at bay. Though the invading pirates managed to beat back the Imperial Navy, with no ship they had no escape. Coming off the successful campaign, Braul followed Baron Frank Avilia's mentorship and ran for the office of Sheriff on a platform of gathering more people into Faila Ranae's flock.

As Braul began working towards a new goal of leadership a peculiar event occurred. Islands began floating across the skies of Faila Ranae. Brightly colored flamingos appeared in a lagoon that hadn't been there before. Pirate ships were seen from shore and several of the locals hoisted their own Jolly Rodgers. The most dramatic change can to Braul's own body and he was transformed into a fairy! Delicate wings unfurled from his back, which contrasted greatly with the powerful muscles that bulged under his skin. A reality-warping effect turned much of Winter's Edge into Neverland! Trying to make sense of it all, the new monarch went to the kingdom seat. There he found fairies, pirates, and feral children at war with each other. Wading threw the carnage, Braul was caught off guard by a massive Kraken throwing people left and right. Braul was broken in the encounter. With time, and maybe some magic, Braul might heal.

After the kraken attack Braul spent some time healing. From his bed he saw the wave of reality shift once again. He wasn't sure what had happened but new creatures roamed the woods near his home. He began recording what he saw. The creatures seemed an amalgam of other animals. Some were friendly while others were definitely not. The clothing the people wore seemed to change a bit as well, more uniformity appeared in color-schemes, and these colors seemed matched to the elements.

First issue! Topics include tournament results, goblins, and the Sun and Earth Quest

Amtgard Supplements
Based on various Rules of Play, these books offer monsters, themes, or game mechanics.

Amtgard v8 Kingdom Reign-Theme for Avatar: the Last Airbender. This book, The Four Nations, has monsters, magical items, and other thematic content for the world of Avatar to play in Amtgard. Braul wrote and did the illustrations within the book as well as the PDF formatting.