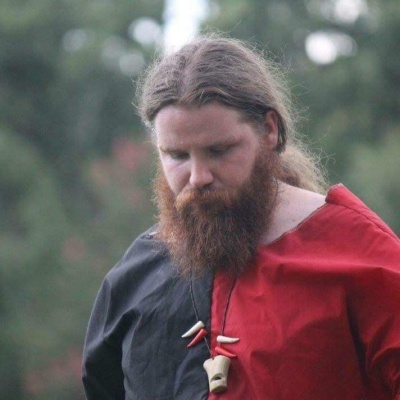 I am Aubrey Samuel Westcraven, Paragon Barbarian of The Wetlands.

I was born the bastard son of a lord. I grew up believing if i survived through my 18th birthday my father would claim me and name me heir to his throne as should have been my birthright. Apparently my father had other ideas. the day of my 18th birthday he came to me and invited me out hunting with him. I stupidly assumed that he was here to congratulate me and prepare me for the announcement I thought he would be making the next day. I was Wrong. shortly after dusk my father attacked me and savagely beat me almost to death and left me there broken and bleeding for the animals to finish off. This was not to be my fate either. A rogue Vampire came across me shortly before my death and on a whim gave me his blood turning me into one of his kind. He was kind enough to drag me into cover before the sun rose (and before he abandoned me). I awoke the next night (though it was years before i found out it had only been a single night) not knowing how long I'd been unconscious assuming it had been weeks if not months as I was fully healed (I had vague memories of my attack and knew there was no way I could have healed from such an attack in any sort of timely manner). I wandered into the night and was amazed at how well I could see (this should have worried me but at the time didn't). When the sun rose the next morning it was what I could only describe in polite company (though I wouldn't hardly call you people "polite company") as morbidly uncomfortable. My skin blistered in moments every where the sun light touched me and my eyes burned something awful. I quickly retreated to the cover of a nearby stand of trees and waited till night to move again. Again this should have told me something was wrong but I was still amazed at being alive. My stomach began to growl loudly as I realized how hungry I had become. I found a small settlement nearby and stole some food out of a cottage (these many years later I could not tell you what kind of food I had taken) but this food did nothing to state my hunger. my body began to ache like nothing I could ever remember feeling in my life and my stomach growled with such veracity that I could not hear my self think. this was the point that my new "instincts" took over. I raced back to the small settlement and broke into the same cottage as before and before I knew what was happening I had ripped open the throat of the man sleeping within and feasted on his lifesblood. The next years are a blur. With no older Vampire to train me I cut a bloody swath through the country in my bloodlust. One fateful night I stumbled blood drunk into a camp of BARBARIANS who had lost their leader in a raid earlier that day and were fighting for control of their horde. As I was cocky and blood drunk i stepped in and killed the 5 or 6 that were warring for control effortlessly and took control of the tribe. They taught me the ways of the BARBARIAN and kept me safe during the day and at night I led them into raids were we rarely lost a man. This continued for many years new men joining and old men leaving the tribe until I grew bored. One night I struck out on my own and came the the settlement of Red Storm and decided to settle down (I had long before learned to control my feeding and had complete control of my lust).

I started Amtgard in late 2008 and from day one signed in as a BARBARIAN over the years i have received a lvl 4 warrior without ever signing in as one do to fighter practices. i started when i was in college in Tulsa Ok at the park Red Storm in what was then The Emerald Hills (now Dreadmoor Confederacy) and played until 2010 when I moved back to my home of Houston TX. Due to life I took about a 2 year break from the game before coming back in 2012.

From about my 3rd week in the game i have had recognizable BARBARIAN garb and over the years have added to it making it better and better.

From very early on I knew my abilities as I unlocked them and even made the switch to V8 with little trouble.

From my first event (Ides of March II in 2009) I have strived for what was then called Masterhood now Paragon. And in this time was passed over for it by people who didn't know their abilities, couldn't have gotten a LTP bonus if it had been granted to the entire field and as far as I had seen never even attempted to show a new player how the play BARBARIAN. I watched as friends of the sitting monarch or GMOB received their Master/Paragon.