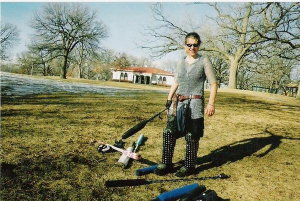 Daughter of Sir Alessandra(EH), niece to Sir Garath(EH), and sister to Squire Farren and Flute.

Alonna, along with Farren, was brought into Amtgard by their mother at the tender age of 5(1988). They resided in Dallas, attending the original Tanglewood in Duncanville. In 1994, the group settled down in St.Paul, MN and along with Garath started Caer Sidhe, which was a shire of the Emerald Hills. Alonna helped keep the group going until about 2000 when the group became inactive. Shortly after this the, a group in Lakeville, MN developed and eventually disbanded when Alonna, Farren, Sir Zodiac and Topaz went back to Saint Paul to found Starmount.