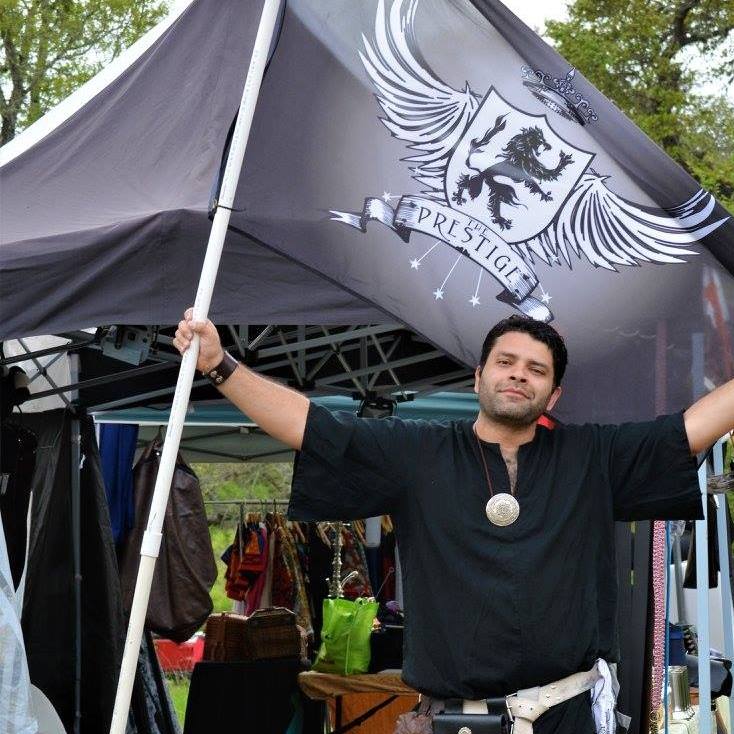 First appearance was at Sir McFadden's first coronation event (Dec 2000) in Tanglewood Forest after a brief introduction to Amtgard by Infamy.

His favorite recollection of the coronation event that ensured his continued service and participation to the club was the ambiance. Showing up in only a modified graduation gown as wizard garb, his experience at the event was magical. The candle-lit feast safely nestled within the warm confines of a 100 person tent made for excellent memories. He found himself sitting at a table of disgruntled Shadow Legion Saracens waiting for hot water to reach their table. Powdered cider isn't all too palatable without it you see. Sutra decided to lend a hand and found the meager fire that had been setup to heat water a gallon at a time. He proceeded to carry a 5 gallon Igloo and managed to water a good portion of the populace including the high table. With this act, Sutra was called to sit next to the incoming monarch for a meet and greet. Here, Sutra realized, was home indeed.

The Texas chapter of Morgorach was Sutra's first battle company affiliation. It was here that he learned that a great company is cultured through social gatherings outside of Amtgard. Sutra was a Morgorach member for about a year and a half before it's local founder had to disband the group. Sutra remained a free spirit until June 2007 when he finally accepted the proud duty of wearing Sable Pride Black and Silver. He's never looked back since.

Sutra is best known for his addiction/dedication to Amtgard History. He scoured as many resources as he could and collected it all into one ambitious archive. With the gracious help of select Amtgarders who opened their archive vaults to him, he meticulously digitized a plethora of historical documents that otherwise would have been forgotten.

Now runs the travelling merchant Shoppe: The Prestige with his constant companion Erra.