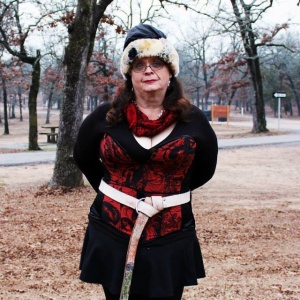 Longtime member of Amtgard in the Celestial Kingdom area, Pebyr started in Barad Duin in June of 1988, later joined Turris Lunae. A skilled bard, she has written a number of popular songs at Amtgard, including arguably her best, "Gypsy Caravan". As a long time Amtgard merchant, she originally cooked and sold food, as well as pre-packaged snacks, knives, books, and other like items. She was also the second person in amtgard history to hit 6th level bard. As she puts it, "the class was so broken, nobody but me and derydilus wanted to play it bad enough". "My instrument was my voice, which worked, because I was a well known singer".

Pebyr was the first Celestial Kingdom Prime Minister, and first Kingdom chronicler, and put out the first five issues of the Star, the CK newsletter. In addition, she was the first person knighted in the Order of the Serpent in the Celestial Kingdom. In a long list of seconds, she was the second person knighted in the CK, after Michael Hammer of God, and the second person to receive their 3rd belt, again after Michael Hammer of God.

In 1993, she was the first CK monarch to pass into the corpora, rules concerning the ability for duchies and baronies to give awards, and the creation of the first principality of the Celestial kingdom. In the mid 90's, she began as a vendor and for several years was the only merchant in texas events.

Pebyr gradually became inactive in amtgard in the late nineties, spending her time participating in the SCA. As of 2008 she is semi-active, and in the last two years, after several major life events, and finally having a car with good gas mileage, she is going to many more events.

Founding speaker of the CK saracens

Recently she has started becoming active on facebook and creating several groups. The most notable of which is the Amtgard LGBT group and is working hard to improve things LGBT members all over Amtgard. In this regard, she is the first Intersexed Amtgard knight. Her next challenge, will be house fierce and the lgbt group.

Goddess for the church of pooh. Chieftain for Life, founding chieftain and speaker of the celestial kingdom Saracens. Member of the Darkjesters and Amazons.

Creator of House Fierce, an inclusive household in Amtgard.

Pebyr was the fount of her own beltline. She had no less than seven squires join the peerage; Dame Melinda MacLaren, Sir Maniacles, Sir Lowell, and Sir Belloch in the orders of Serpent, and Sir Sable Cacophony in the order of the Crown, and Sir Wilhelm in the order of Flame, and Sir Logan T. Black in the orders of Flame, Serpent, Crown, and Sword. She finds it endlessly fascinating that the fact that nobody wanted to squire her actually means something now. That and the fact that she has no indicative quote means that larin is obviously slacking on the job.

The very First Kingdom Knight of the Serpent, Prime Minister and chronicler of the CK, and the 6th Monarch.

With her entourage at Clan 17