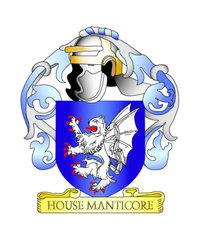 ”Our Honor is Our Own”

Heraldry - A white manticore, rampant on a blue background, with crimson claws and stinger. Tabards are bordered with white. Petitioners tabards do not have the manticore.

House Manticore is first and foremost an Arts & Sciences organization that wishes to further individual and group knowledge in regarding the realm of the Medieval. House Manticore also recognizes the monetary costs involved in such pursuits and seeks also to aid in the realm of 'merchanting' to facilitate the cycle of learning.

During the Summer of '96, some friends in the Army decided to join a local medieval/fantasy reenactment group, Amtgard. Corwin had joined the group with a friend of his, known as Styles (now as Alexandr). Corwin also played D&D with a few guys in his unit. One evening he was late getting to our weekend game session… and upon his arrival, explained why he was late. He had just gotten back from a small event with a group call Amtgard. After his explination, the rest of us thought it would be pretty cool to give it a try…

Eventually we small band of friends created a Company, with Corwin in the lead. We named our company Legion and our household, House Manticore. Thereby… Legion of House Manticore.

After a couple of years there in the Dutchy of Dragon's Haven playing the game of Amtgard many of us drifted away… not because we did not enjoy Amtgard… we were all in the military and because of that were deployed elsewhere or got out of the military entirely.

Eventually Mephiston was released from the military… and went back to his home state of Illinois to go back to school at Illinois State University. There he found a local chapter of Dagorhir, ”Wolfpack of the Highplains” (note: this group is now part of an organization called Belegarth… this story is very messy and really has no bearing here.) After fighting with this group Mephiston gathered together some like minded individuals and re-booted the Legion.

And even after all the ups and downs of the start of Legion in Illinois, we are still here… and with the family unity that we all share in this organization, will continue to do so for many years to come.