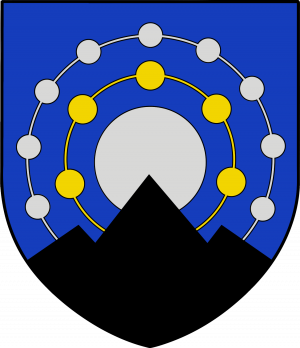 Desert Winds is the combined effort of four great parks to be come a part of a bigger stronger unit. The Empire of the Iron Mountains has hosted each park independently and has agreed that together we have the ability to make a stable kingdom within the game. With a vote of confidence the Principality was formed and after roughly 2 years was voted in (12-0) as the 16th Kingdom in the history of Amtgard at Clan XXVI in 2008.

Our charter is listed on the yahoo group with JW’s signature himself on 6-21-00. Started by Esmar Tuek and a few friends River's End stayed as a struggling shire for a couple of years even though it gained sponsorship of the IM sometime between July of 2001 and September 2002 (I don’t have the exact date). Esmar Tuek kept the shire alive, if by alive you mean he showed up by himself at least half the time, until in September of 2002 some whack job newbie with less then 4 months game time moved to SLC from Pegasus Valley in DS (Also known as Fitz).

Esmar left for boot camp in January 2003 and told Fitz “as the only dues paid member of the shire I’m voting you in as sheriff, here are the records, the lock box, and please clean out my garage of anything amt-related before my parents throw it all away”

Fitz then started trying to reactivate folks, called everyone who had any contact info and managed to get a group meeting at a better park.

2 months latter we had baronial numbers and petitioned for Baronial status to the IM.

During this time Sir MHoG contacted the Sheriff of RE and asked him to coordinate a joint meeting for the Utah Chapters (there was a barony in Southern Utah at the time, the Barony of Dragonspyre) for a visit since he would be stepping up as IM Emperor at Rakis ’03 and would like to meet us beforehand. Two weeks later Salt Wars 1 went off without a hitch.

We were raised to Barony at Rakis 2003 by Emperor Lief/Princess Cutari (even though we’d also qualified as of 2 weeks prior to Rakis for a Duchy by IM corpora).

Shortly after Rakis RE learned of a new shire (Desert Rose)that was starting in Elko Nevada and we were invited to their first event DBW1 and had a blast. We put forth our full support in them to the IM Core and sponsored them to the Empire. Shortly there after the IM accepted DR as a sponsored province.

At Salt War 2 (held at Kayrana Fields) we were raised to Duchy (having maintained Duchy numbers even through the winter) by Emperor Grendel of the IM.

Sometime around here RE learned of a Shire (Truevale) starting in rock springs Wyoming and we sent a delegation to a recruitment day at their college campus (the infamous peanut #2 event).

RE sponsored TV to the IM and it was (I believe) admitted to the IM during around February of ‘05, The Shire of West Gate Pass (now known as Phoenix Rise) having formed in 2003 in Grand Junction, near this point gained Sponsored status through the IM via Wolf company affiliations.

All 5 groups in place (Duchy of Rivers End, Barony of Dragonspyre, Barony of Desert Rose, Shire of Truevlae, Shire of West Gate Pass), we then worked hard on helping the creation of principalities in the IM. During the process the Barony of Dragonspyre left Amtgard for reasons we can only speculate upon. Upon Principality ratification by the IM core we put forth our bid for, and were granted, Principality Status (Principality of Desert Winds) on May 14th (’05) at Salt War 3 (held at Kayrana Fileds) by Empress Talisin of the IM.

At Clan 2008 we were unanimously voted in as Amtgard's 15th Kingdom and Dame Sindari (KotF) was belted during our first hour as a Kingdom by Sir Moss Emperor of the Iron Mountains (directly after the COM vote, in a slight break in the rain).

(Editors Note: I want to take this chance to point out the fact that Fitz has done an amazing amount of work to move River's End from a struggling shire to a Duchy in record time, he also has been a key force in helping make this amazing Principality a reality. This is not to say others weren't integral in this effort too, but without the work of Fitz we would probably not be where we are. -Loptr)