Originating from Nine Willows, Zsadist is an accomplished artist and strives to improve her archery and fighting skills. She has resided in Dark Oasis and Irongate making many friends in her stay and many more in her travels. She is a very determined fighter and enjoys sharing her knowledge of Art to others. Careful, she gives hugs!

The Tale of Zsadist Nightshade

Dunmer, dark elf. That is what I was called in my home world of Tamriel. Now I am referred as a deep-dweller or Drow by the people who live in the world I have stumbled upon. Though they seem to be rather baffled that I am able to walk around in the day with little to no cover. What can I say? I do not believe they could fathom my being from another world. I hardly understand it myself.

I remember traveling the roads of Skyrim as an Archer for hire, secretly a member of the Thieves' Guild as well as a member of The Dark Brotherhood. The many times of fighting bandits and wild beasts. Giants with their pet mammoths. Taking on miscellaneous assassination contracts and whatever odd jobs Vex or Delvin threw my way. Thanks to the return of the Dragonborn, I even got a few dragons under my belt. My life in Tamriel was simple and fulfilling. I roamed and found work where I could, my bed was under the stars if there was not a town I came to.

My last memory of home was my journey towards Whiterun. I had hoped to try and find employment, though it would not come to pass that I would end up there. Just as I saw the keep in the distance a bright flash of blue engulfed me as if someone was summoning and arcane familiar, then I awake in a world I knew nothing about.

I did not expect to appear in the middle of a battle, now was I expecting to see the underbelly of a red dragon inches from my nose either. It seemed preoccupied by the group of mercenaries battling it. Best idea in that sort of situation? Move out of the damned way.

As quick as I could with out letting the beast know I was there, I shimmied myself from under it. Soon as I knew I was clear I quickly equipped my bow, notching one of my arrows to the string. I almost regret firing the thing. My mind had become garbled with some kind of vision of an arrow engulfed in flames. That type of magic just does not exist in Tamriel, so why would the notion come to be here? Letting the arrow go I just stared in awe of what I witnessed. The arrow caught fire and lodged itself right in the left eye where I had aimed.

The attention I received was unwanted. The dragon looked my way and I froze. I was certain this would be the end as the flames of the arrow incinerated the eye it was stuck in. I was lucky. The moment the beast had opened its maw to swallow me whole one rather large wolf black as a shadow grabbed the dragon by the throat. He bit the beast's head right off and as it fell to the ground I could only stare.

The wolf was massive in comparison to the native wolves I slew in Skyrim, but even that recognition in size did nothing but become self-explanatory when the animal transformed in to a man. A man I thought was another Dunmer, foolish hopes. He turned out to be a half-breed, a half-Drow half-Human mix. I figured what information he would give me I should take as truth and not press anymore from him, from Azazel. Such a strange name. Though I figured out rather quickly not to go by my true name either. No, with magic like I had already witnessed? A true name in the wrong hands would be detrimental.

Zsadist Nightshade would become my new alias now and forever more. My true name never to be uttered to those who are of this world. The realization that I would never again seen my home world had sunk in, or I hoped it would. No more work for the Thieves' Guild, no more contracts from Astrid and the rest of the Dark Brotherhood. None of those would matter here, but the skills I had learned may be of some good use I supposed.

The mercenaries, though not very talkative, allowed me to travel with them until the next town. So kind of them, I know better than to sleep peacefully around complete strangers. In a new world? Sleep was absolutely not an option. It would be nothing for me, I have done much worse on other missions. We traveled for four days and four nights, upon the morning of the fifth we arrived in a duchy known as Nine Willows. They escorted me to an inn and even were helpful enough to provide me a bit of information of where I was. What world this was and the ways people got by day in and day out. I needed to register with their Duke and figure out if I was to make residence here. It was like starting my life all over again.

Azazel left our company just shortly after giving me the majority of the information. I only caught a glimpse of the group he had met up with. A group of what looked to be assassins, I knew better. The stripe of blue adorning their tunics had caught my eye. There seemed to be three or four of them, though I don't recall ever seeing Azazel wearing such a tunic. I never questioned him either. The Unseen Hand, that was what they were called. Their reputation astounded and intrigued me when I inquired of the stories. Perhaps if given the chance, I would love to join their company, I'm sure I could prove myself useful somehow.

I was settled. A room for the night, a possible job in the morning. Not too shabby I thought, especially for only having been in the duchy for less than twenty-four hours. I slept soundly that night. Best sleep I had got in days, not even a Daedric Prince could wake me. Or so I had thought. I had been careless to neglect my knife, it usually lay beneath my pillow. Not this night, it stayed with in my bags. Oh how I wished I had kept the damned thing close. Not a sound was made from the intruder whom came through the balcony window. His presence was unknown to me until I felt him latch onto my throat.

Vampire. Damned the divines for the fate I was being given. As I felt my blood leaving my vein, my vision swimming as death began to take over me, my thoughts were of nothing. My parents long dead, no loved ones in Tamriel to speak of. My families in the Thieves' Guild and the Dark Brotherhood would have already written me off days ago when I did not write to them. I was alone, alone and now damned to die by this Vampire.

I awoke again, a few minutes after the attack. My head hurt, my body burned and I could taste something metallic and yet sweet in my own mouth. My eyes tried focusing yet, failed to do so. I was only able to make out shadows and knew someone was watching me. The window, he stood at the window. I felt this overwhelming urge to lash out and strike at him, but my body felt unlike my own and I could do nothing. His laughter rang in the silence and all I could do was growl pathetically in return.

"Death will not claim you. You who are not of this plane." That voice, taunting and belittling me only served to enrage me more. I could feel him come closer to me, getting close to my ear as a change began to go through me. I was filled with an agonizing pain I had never experienced before.

"You can try hunting me down as long as you would like. You can follow behind my shadow all you want." His presence began to fade away, was it a dream? No. The pain had continued, my blood running cold, my heart beating slowly to a stop. He had turned me!

"Zsadist, now one of my childer. Continue on, continue to do as you have before from your world. Prove your worth and the time will come when you will be ready."

"Bastard." That was the only word I could mutter through the pain that was beginning to subside.

"Aye, that I am. Do protect yourself from that hellish Sun. Do not want you going to waste." His presence was gone, completely gone and I was left there as the change completed itself. When I felt my strength slowly returning I let out another detested growl before going to view my reflection. I could not see much different, other than my once red eyes had changed to a haunting ice blue color. My pupils were slit like a Khajiit's. Opening my mouth I saw the fangs now hanging there, a bit tender to the touch. I would be ready in time. Cryptic. He was right on many parts in his message. I would hunt him, for several long years. I would travel all over these damn lands to find him and hunt him down. Yet, I knew not even his name nor face. I would have to hear him speak.

My new purpose had been made. I did well to hide my flesh from the cursed light signifying day. My face now and forever more hidden behind a mask when I would be around others. I became a woman of very few words, which suited me just fine. After all, becoming an Archer and Assassin for hire once more meant I did not have to converse. Words were not needed. Taking on a few contracts that required killing another, speaking was void, just as I had done in the Dark Brotherhood.

I once again walked the shadows, stalking those I hunted. Sometimes my meals would come easy when my jobs gave me a target, if not? Well, a few missing beggars and drunkards here and there would not go noticed. Years my search continue for that damnable man who gave me this-- gift? I have come to view it as such. Before I would have not hesitated to call it a curse, but that would have been my naive notions of returning home. This world is my home now. This Kingdom of the Golden Plains. I have traveled and lived among those with in Nine Willows, Irongate and Dark Oasis. I have befriended many surprisingly.

I eventually and much to my surprise, became part of the Unseen Hand. Proven my worth and with the help of the one named TommyKnocker, again with such odd names, I have become a sister. A family member in this band of fighters. The Captain speaks, I listen. His voice bringing the memories of my change to the forefront of my mind. Perhaps he is the one who turned me. My veins know he is, but I will no longer hunt him.

No. He gave me new purpose in this world. I fight now under his command and that of his Lieutenants. I fight when called upon lending my arrows and blades for the cause. For HER. 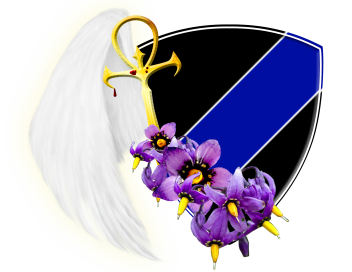