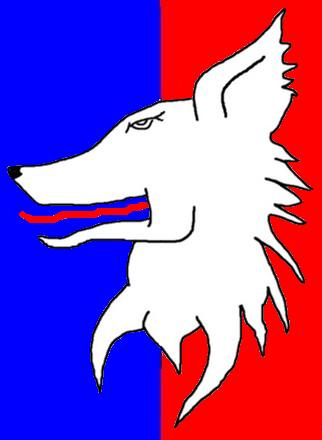 Per Pale Azure and Gules, a Wolf's Head Erased Argent, Langued of the Second

The Wolfpack is more than a fighting company; the Wolfpack is a group of people who have chosen to call each other family. Like all families, we have our disagreements with each other but woe betide a stranger who chooses to quarrel with us. The bonds of Wolfpack have been known to stretch far outside the realms of Amtgard and into other LARPS, Renfaires, and Mundania.

Wolfpack was built on the principles of Loyalty, Honor & Courage and we prize these traits above all others in our members. As a rule, the Wolfpack does not recruit, but allows potential Runners to seek us out and petition to join.

The Wolfpack is most active in Midnight Sun in the Emerald Hills but has members in at least three other groups within the kingdom. Wherever you find our members, they will be serving their group in some form or fashion.

Wolfpack is one of the oldest companies in the Emerald Hills, having formed in the SCA group that later became the core of the Emerald Hills in the spring of 1988. It was founded by it's first Captain, Landolf Röentgen. Landolf left the game for about a year from about March of 1989 to March of 1999 due to politics. During that time, the Wolfpack played a game similar to Amtgard called Freehold. Freehold attracted several new members and when they visited the Barony of Ironcloud in March of 1989, they all decided to come back to Amtgard. Shortly after thier return, the Wolfpack merged with another company, Dragon's Teeth that was led by Gavvin Quinn. Gavvin became the Blade (Lt.) of the Wolfpack and later was named Packleader (Captain) when Landolf left Amtgard to pursue other interests. Alexzander is now Captain of the Wolfpack.

In 2007, Wolfpack started holding a tournament to determine the company Champion. The following people have held the title of Wolfpack Champion:

Credo of the Wolf

Cooperate with the pack.

Play when you can...

Hunt when you must...